The snack bar roll-door is closed and the old benches are set up close enough, back to back, that they look like they're in storage. No skate rental, no snacks, but the staff guy is friendly and the people who have discovered that the rink is open look pleased. 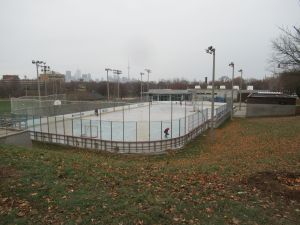 a few skaters on the morning of the first day 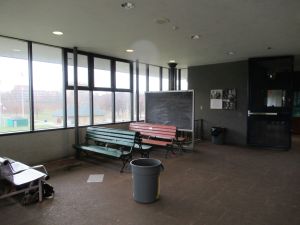 lots of benches, back to back 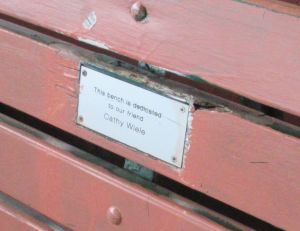 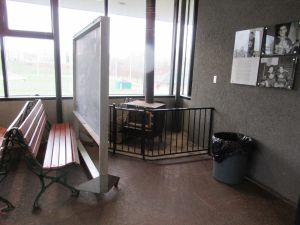 the woodstove is blocked off -- must be lonely

Today was the second Essex School visit with skate lending by CELOS. This time we were allowed to use the kitchen and the counter, and that worked much better. It snowed the whole afternoon and no one ever came to take the zamboni out of its new garage and clean the ice, but the kids had fun skating in the snow anyway. 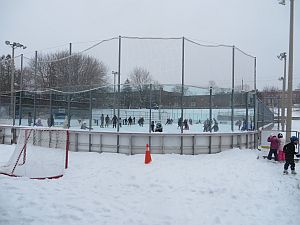 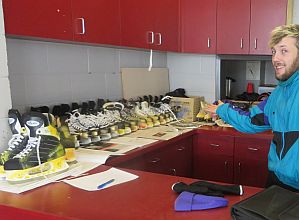 skates lent out from the unused community kitchen

There were two staff people on site, and even though there were a lot of kids who needed help with skate lacing, the staff stayed in their office and chatted with each other. When asked whether their training actually prohibited them from helping when a class of little kids comes, they said they are allowed to help, but not required to do so as part of the job. They were helpful if a kid came to them to ask, but they made no effort to circulate in the change room to offer help. Very strange to see able-bodied paid staff idle while so much help is needed.

The staff said the woodstove is never used, and in fact it was very dusty. They weren't sure that it even works or how to "turn it on." 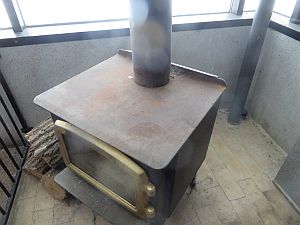 cobwebs on the stovepipe 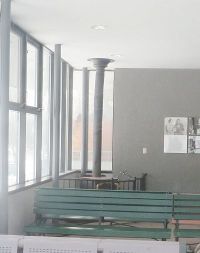 Some more questions about the woodstove, to the city rinks supervisor:

1. who is tasked with giving the "thumbs up" that you say is needed to use the wood stove at Christie Rink?
2. When was the work order put in, to ask?
Please give me the timeline.
Is that also why the identical Dufferin Rink wood stove has not been cleared for use this whole rink season, despite a very cold winter?

A query about signage to 311 brought this message, from the citywide rink supervisor: "I have asked that they confirm the posted location schedule is on the windows." A follow-up question about the use of the wood stove brought this: "I was curious about the stove when I first saw it but was told there were issues with the use of it. Until we received a thumbs up on its safety I wouldn't be able to use it."

At 12.20 pm the rink is locked and there's no signage to tell when it opens. There are no skaters, either. 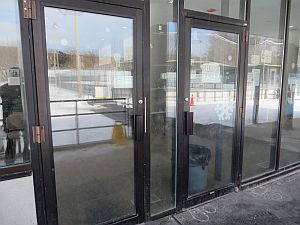 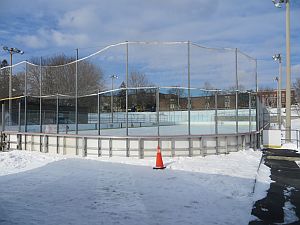 no skaters, on a beautiful day

lots of kids from Essex and Palmerston Schools 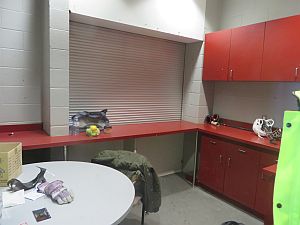 The unused kitchen has a counter with a roll-up barrier and a shelf that can be used for skate lending. However, the use of that room had not been cleared with management, so we had to put or skate bins on the ground out in the change room -- it was pretty chaotic. There's no scheduling person at the rink to book schools so that the classes don't all come at the same time. Plus the teachers have bring along scrounged equipment for those kids who don't have their own, and then there's the lacing of the skates, the finding of the helmets..... Even so, they did pretty well.

An item on Metro news, about Councillor Layton's proposal to ask City Council to ask the Parks Forestry and Recreation general manager to prepare a report on whether skate ending can happen at other city outdoor rinks besides the ones in Ward 18.

As promised on the schedule that's pinned up on the bulletin board, the rink change room is open. That's a first at this rink -- its change room/washrooms are often locked. Today there are two staff inside. Because of the cold, there are only 5 skaters, however. 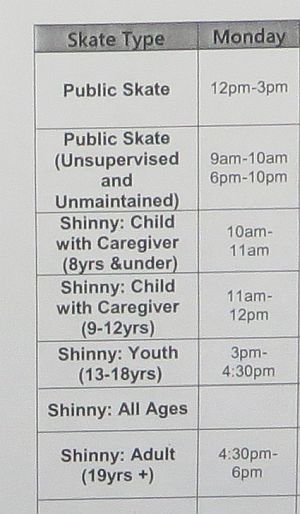 With the temperature at minus 18, a fully-booked holiday hockey class has only 6 kids in attendance, with three instructors. A man arrives on his bike, hockey stick tied along the frame. He gets on his phone to see where else might be a spot for shinny hockey.

There's no staff person inside, although parents watching their kids' class say that there was someone in the office, and then he left. There's a temporary bulletin board with holiday schedules -- good news! For the first time in years, it looks like the rink change area and washrooms will be open on New Year's Day.

Follow-up on skate lending: the city councillor for this rink, Councillor Layton, seems to have become the spokesperson for why no additional neighbourhood outdoor rinks can have skate lending.

His reasons (given to the West End Phoenix):

- Parks and Rec is underfunded, can't provide rink programming
- rink staff have to focus on safety, can't be distracted by skate lending
- he tried to get more funding by raising taxes but couldn't get support
- city staff "don't have the expertise to maintain skates so they don't become a liability" read more

In a Dec.27 tweet, Councillor Layton wrote "my responses to questions came from city staff."

Then he suggested that the issue might be taken to the Parks Committee: "after a more public examination, a discussion can often uncover solution we didn't know existed...." 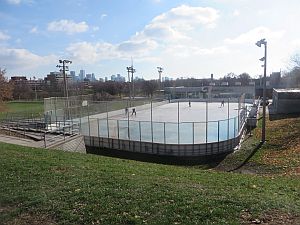 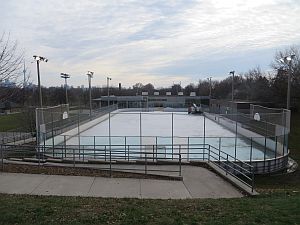 There were very few benches inside but the building attendant said he's been asking for more.

Not many people there yet today, but all ages shinny was said to be enjoyable. Half a dozen fast players shared the ice with three kids, the big guys passing to the kids as well as dodging them.

The rink is open.

The compressors are on and the rink looks clean except for one little pile of leaves. 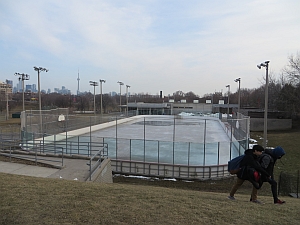 March 5, 2016: often empty even when not covered with water

The rink has been covered with water much of the past week or more. Almost no one comes to skate but it continues to be marked as open most of the time. The rink follows the March pattern -- even when it's not covered by water, most skaters stay away. So at 3.30 pm today, the rink finally closed for the season.

As is so often the case at this rink, the rink change room was locked. On this busy holiday, a line of people had to sit on the ground to change from shoes to skates and back again. No washroom access either. Many other city rinks were fully open on New Year's Day -- why not Christie? The cost of putting in a minimum-wage building staff is very low. 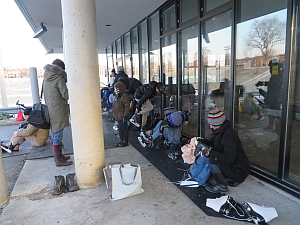 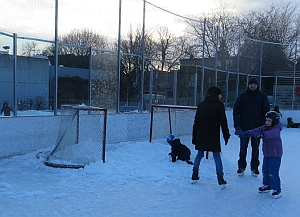 The header trench is closed and the fencing is gone. The ice seems to be pretty good despite the warm weather.

The header trench is still open. The chemical toilet is is gone but the fences are up. But no sign of work being done. However the plant is running and the ice seems good. The building attendant was asked about the lack of any signage giving the rink hours and skating times, and he agreed it would be good to have something up, but said they didn't get anything yet. He also said that it was true the rink building was not open last weekend -- no one had been scheduled to work and besides, the ice had been poor. 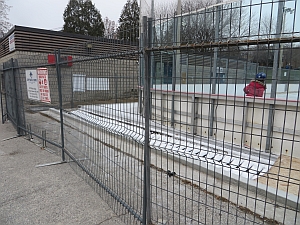 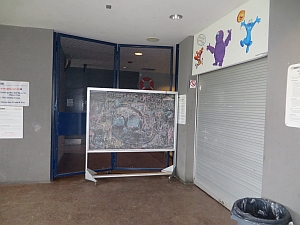 The city councillor, Mike Layton, sent word that he is planning their fifth annual Family Day skating party for February 15, and wants to arrange to get Randy's loaner skates for this event. 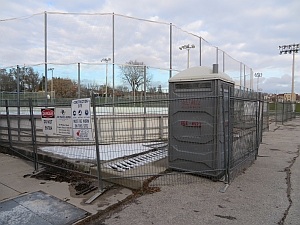 fence and toilet stall for workers

Yesterday the compressors were on but today they were silent. There's a construction fence beside the rink, and the header trench is open. Troubles? No signs are posted, and the rink is supposed to open on Saturday. 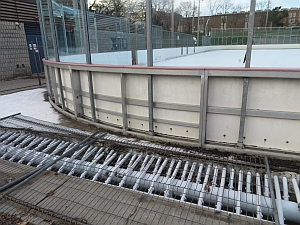 open header trench, but no workers

The rink did open, but at 4.30 the rink house is locked and there is no signage on the door telling anything about the schedule. Maybe Kim Brown, the recreation supervisor, didn't realize that she should staff the rink. Despite the nice design, there is a long history of poor service at this rink -- too bad. 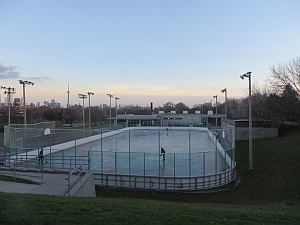 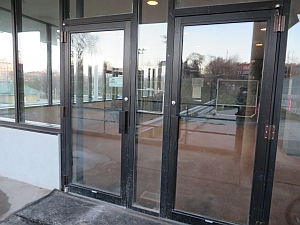 no signage, and not open either

The header trench is still open but the rink is operating.

This is one of the additional 12 rinks scheduled to stay open to March 22. The ice is pretty rough and most of the time there's no one skating. 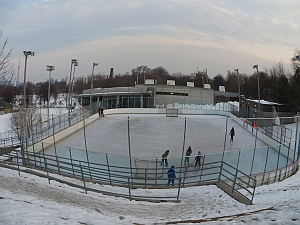 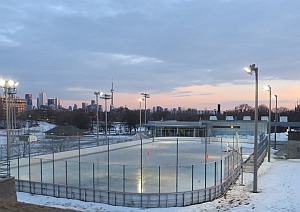 A problem with the HOLIDAY HOURS: it appears on the city's rink information website/311 that almost all of the city's rinks will have their changerooms/washrooms locked on the three main holidays: Christmas Day, Boxing Day (yes!), and New Year's Day. You can skate on most of the rinks but you can't get your kids out of the cold to change their skates and you can't take them to the washroom. This is true for Christie Pits. 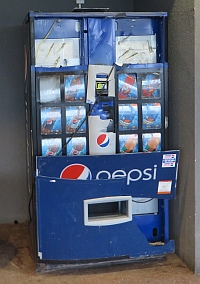 At 3 pm the rink change room is open -- two pleasure skaters out on the ice. The rink staff says that the building opens at 12 noon on weekdays, but he thinks that if a school class wanted to come, they could get the building unlocked. However, he says, not many school classes come, only occasionally.

There is a Pepsi vending machine against the wall, but it looks like it's been smashed in places -- there's no out-of-order sign but it seems like its dispensing days are over. 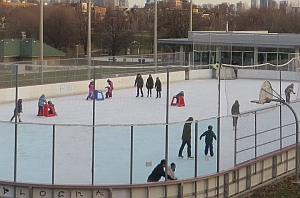 This rink opened on time and stayed open even throughout several days of warm weather a week ago. They have an unusual time slot on their schedule -- from 1 to 5 pm on Sundays it's "caregiver and child." In order to skate, you have to bring a child. It was well-attended and looked like a happy scene.

We were looking for the winter-time cafe, but the kitchen gate was locked and the building attendant said he hadn't heard that there would be a cafe at any point. Above the cafe there was an unusual painting of cartoon characters, perhaps to make the public area look friendly. However, the rink change room woodstove, donated by Dufferin Grove years ago for skaters to warm themselves, was blocked off by a desk and an office chair, an unimportant afterthought -- similar to other years. 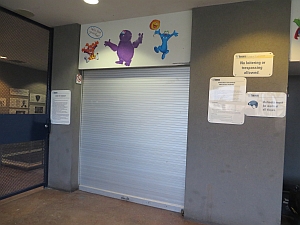 community kitchen was shuttered as before 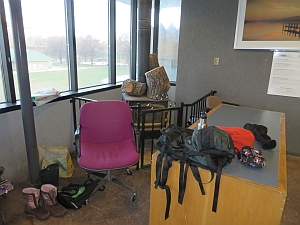 behind the stored furniture is the unused woodstove

cartoon characters with a bubble that says "we're glad you're here"- but no food and no fire
hosted by WordAndData.com | powered by pmwiki-2.2.80
Content last modified on November 11, 2019, at 07:55 AM EST