3:15 pm: 15 teenage shinny players playing in the sun - the ice is wet on the northeast corner where it's been in the sun all day but it's not affecting the game much. The schedule for the season is posted on the changeroom window.

Once again the schedule shows the rink clubhouse as often closed, with limited staff. One way to solve the youth problem, lock the doors. Also no sign of any use being made of the community kitchen.

Sad, for such a promising resource, to see it so diminished. 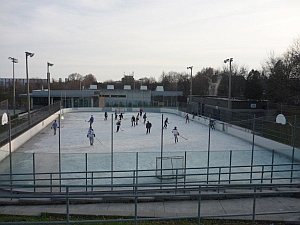 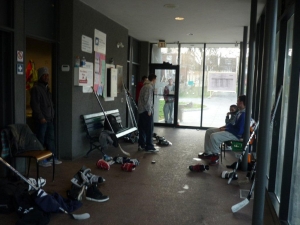 Rink user complaint, saying that a staff person told her she can't be pleasure-skating if she's not wearing a helmet. But there's no rule that requires helmets for pleasure skating except for young kids six and under. A puzzle, the more so since Christie Rink was marked as "closed" on Boxing Day...? 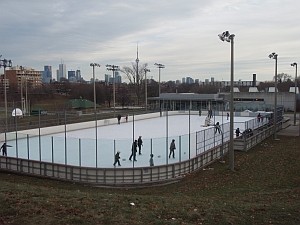 A smallish number of skaters were out for pleasure-skating, although other nearby rinks were packed. I asked the rink attendant about the message on the city website, lasting several days, saying that Christie was closed due to broken glass repair. He said the rink was only closed for a few hours because one of the panes around the rink had been smashed, maybe by a puck.

He also said that the wood stove has not been used at all this season, since the weather is so warm. He said there might not be any wood, either.

The rink house closes at 6 pm on both days of the weekend and it stays closed on weekday mornings, so schools that want to come can't use the change room or the washrooms. Consequently, fewer classes come.