Yesterday's rain froze into ice fast, despite the 11 degree temperatures, since the compressors were turned on. No signage about the impending rink opening, though. 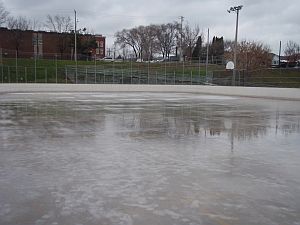 ice freezing up because of yesterday's rain, at 11 degrees 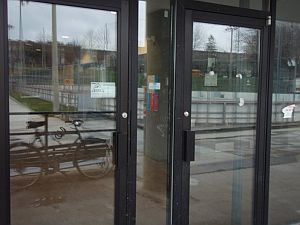 no rink opening signs on the building

Weather: high minus 1, low minus 6, cloudy

At 4.20 pm there were a few people on the ice, no lights on yet, two rink guards visible through the window.

At 8 pm there were six shinny hockey players clustered near one end, since only one light was on. 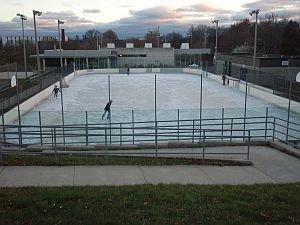 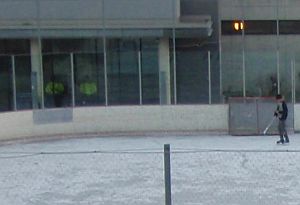 From a rink user: at Christie there is only one bench in the dressing room so players had to sit on the floor to lace up. And 4 of the outdoor lights are out.

The day before Christie had been one of two rinks that were closed for the day (the other was City Hall) because of soft ice conditions. We visited the next day at 12pm noon. The rink was open and the ice in fair condition. Seemed like there was an morning maintenance. It looked like there was about an inch of ice in most places, maybe a little thinner at the north end. Staff said that he wasn't there yesterday but that the rink was closed because of warm weather. You can see the north net crease looks like it had recently melted and refroze. Probably could use extra towel floods at this rink. A few leaves along the east boards; these are going to be a problem on sunny days next week.

Today was a day of sun! And warm weather, the high was 9 degrees C. Christie closed around noon today and never reopened. Why we went by around 11pm, the nets were outside of the rink and the door left open. The rink was solid in most places but very bumpy with water refreezing unevenly. There was a 4'*4' patch which felt like the bottom layer of ice had melted... very strange and this usually only happens if there is poor drainage or if the compressors shut off. Christie certainly has poor drainage.