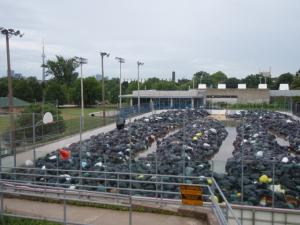 During the 2009 garbage strike, Christie Rink was used as a dump. To read more about that strike, click here.

High 1, low -5. The rink had lots of shell ice but was skateable. It closes at 6 pm on Saturdays, and after that there were only a handful of people skating.

I was eager to get out and play hockey today at Christie Pits. So I checked the schedules online and I also called 416-338-7465. Both confirmed that there would be adult hockey from 4-6pm. There were kids there when I arrived as the schedules said, hockey for ages 17 and under until 4. But at 4pm the rink guard announced that it was now pleasure skating. Unbelievable! A dozen people showed up to play hockey and ended up wasting their time because Toronto Parks and Rec. is obviously not communicating properly with it's rinks. So now I have a paper schedule that I received from the rink guard. This schedule is different from the one online and from the one the person answering the hotline phone. Which do I follow?

I hope it's not this paper one, because adult hockey is now obsolete on weekends. Unless you count the 30 minutes on Friday nights.

E-mail to Christie Rink staff, cc to Councillor Pantalone's assistant, Dec.29 2009: I have a question about the January 1 hours of Christie Rink. The Parks Director sent word to CityRinks, and also to 311, that outdoor rink buildings are open until 6 on that day (only North York is an exception, closing the buildings at 2). But the holiday schedule posted at Christie Rink says the building will be closed all day. We noted that the Christie Rink clubhouse was also closed on Boxing Day, although the Parks director's message was that rink buildings would be open from 10 to 6 that day, and 311 had the same information.

Can you clear this up for us, so we can post the right information on cityrinks.ca?

Response from the rink supervisor: The direction we were given was to close the rink house, keeping the rink open for skating.

Numbers at 3pm: it was pleasure-skating time. There were 18 people, of which 6 (all kids) had helmets.

Four youth were having a noisy card game at a table just outside the office. One of them was arguing with a fifth youth who felt that the card player had stolen his shoes. It turned out that another one of the card players was the building attendant. He told the guy who was missing his shoes to stop complaining, that they would turn up.

I had some trouble getting the staff person's attention, but when I persisted, the card game stopped and the other three guys went out onto the ice. I asked if I could put up my "What needs fixing?" rink poster on the bulletin board, and explained that I had spoken to the Parks Director about it. The building attendant said he would have to check with his supervisor, and put the poster away. He said he didn't know when he would be talking to his supervisor again.

There was no wood supply near the woodstove and the building attendant said they had not been using the stove this winter.

As I left, the youth who was missing his shoes came onto the rink, yelling, "Hey fag! Where did you put my shoes?"

Numbers at 7 pm: 10 shinny hockey, 3 with helmets. 5 inside playing poker with rink guard

They've had some maintenance today, but because of the snow, they've been using green shovels too. 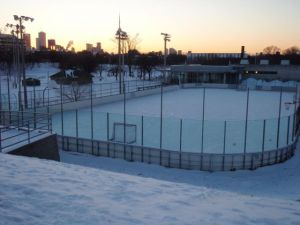 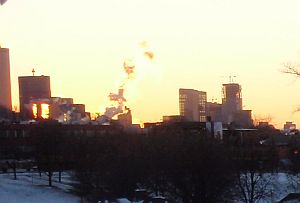 view from the park: cold morning, minus 15

At 12.45 I visited again. The ice had been resurfaced and there were 4 people on the rink and 4 people changing inside. They looked very cheerful -- "it's not cold out there!" One rink guard and one building attendant, who said there had been some really enthusiastic skaters earlier, who had already left.

I said that Christie Rink has a nightly poker game in front of the office, but the two staff were dubious. "Cards, maybe, but not poker."

Numbers samples, 7.30 pm: 12 shinny hockey players, no helmets except for one goalie. 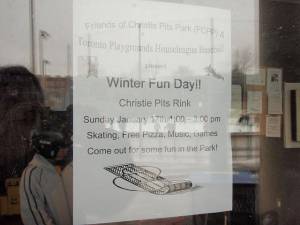 At 2.30 pm the rink was hopping -- the pleasure pad was full of skaters, the snow hills were swarming with kids, indoors there was hardly a spot to sit down. It was the Christie Pits fun day, co-sponsored by the Toronto Playgrounds Rep Baseball League torontoplaygrounds.ca/rep/ and the Friends of Christie Pits Park. Their chair Monica Gupta said there were games on the snow hills, and even a sing-song around the woodstove. And there was free pizza.

Monica said she brought wood from home and took responsibility for the fire. Apparently the rule at Christie Rink is that the woodstove can't be lit unless there is a dedicated staff just for the stove. Maybe the rink staff's card game could be moved around the corner within view?

Number sample, 8:35pm: 3 shinny players, no helmets. Ice has been scraped, though not very well (little bumpy ridges in places, bits of frozen slush), the building is locked, with only one net on the ice. I went up to the hockey players and said "hey, you know if you want the other net it's right here and the gate is unlocked." he said "ok" then the two of us started to pull it onto the ice. then a guy comes over on his cell phone, I see it's one of the guys who usually works nights there, often playing poker, in his city of toronto hat. he asks if we're just trying to get the net on, we say yes, he helps out, still on the phone. I ask if he works here, and that i had assumed no one was here since the building was closed. he said "we're closing soon". I asked if there had been a permit tonight and he said no, never on mondays. then he went back to sit in a car in the parking lot with a friend.

As I arrived rec staff were locking the building promptly at 4:56pm. Today was Olivia Chow's big family event from 1-3pm - the rec staff said there were hundreds of people there. He said the rink lights would be on until 11pm or so.