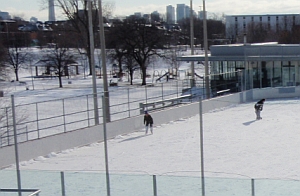 A beautiful sunny day, but a pretty snowy rink. No ice maintenance on New Year's Day except in Etobicoke. So in the afternoon, staff and rink users cleaned off the snow at 1 pm with shovels.

Ice maintenance: 1pm and 5.20 pm flying squad. Cleared manually 3 more times throughout day, because the rink was so full of people. 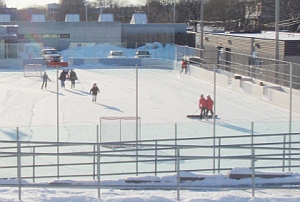 clearing the rink with shovels, just as the plow-truck arrives

Rink users and staff arrived to find the rink pretty snowy again, from a lot of use and one unfortunate snow flurry the day before. They set to work with the big green rink scrapers, and snow shovels, to clean the rink of snow. When they were about half way through (10 a.m.), the plow-truck arrived and did the rest. At 1 pm and 5.30 pm the flying squad came.

Cloudy today but no rain until 3.30, and lots of people came to skate for the Family skating time -- staff estimate about 90. The snack bar was open from 1-3 pm, but then had to close (supervisor's orders to only allow 2 hours a week) even though there were still lots of people around. Skate rental was very popular but also had to stop before people were ready (same orders).

Ice maintenance: 3.30 pm only, using the Ramsden zamboni because the flying squad zamboni was out of order. Ice maintenance staff report much equipment failure.

Lots of snow, ice pellets, a bit of rain. Zamboni/plow came at ___. In the late afternoon, skaters did manual scrapes twice, and were able to keep playing shinny.

Meeting between CELOS and rink staff, to evaluate CELOS involvement with skate rental at Christie Rink.

CELOS: Some kitchen equipment and loaner skates were supplied to Christie Rink, and we paid for a face cord of wood. But there's very little sign of either skate rental or snack bar. What's happening with that?

Staff: The Recreation supervisor is concerned about staff handling money and has directed that skate rental and the snack bar continue to operate only 2 hours a week.

CELOS: Does that mean the skates are mostly locked away?

CELOS: What about the wood stove? Is it being used?

Staff: The original order, not to use the wood stove, was removed, and then it got quite a bit of use, but the face cord of wood that CELOS bought is finished now. We've asked the supervisor if she will pay for another face cord to be ordered.

CELOS: The skates were collected and bought by CELOS in order for them to get maximum usage, same with cooking pots on loan etc. We would like the skates to be in use. Other rinks will use them, same with the cooking utensils. So we need to withdraw them from Christie Rink for now.

The woodstove also needs to be in use. Otherwise it should be transferred to another rink where it will be used. In 1997, then-Councillor-now Member of Parliament Mario Silva and Councillor Joe Pantalone passed along a donation from the Film industry to the Friends of Dufferin Grove Park. Our group used the funds to buy a woodstove for Christie Rink, and the city paid for the installation. CELOS will see this week whether the city supplies wood for the woodstove. If not, we'll ask the city to move the stove to Campbell Rink. One of the long-time permit groups at Campbell Rink said they'd like to have a woodstove there. We'll ask them if they'd be prepared to pay for the installation, and keep wood coming. Some of them are journalists, maybe they can put the word out.

Ice maintenance: 11.30. Manual (rink users): 3 pm. The zamboni came at 4 but didn't do any ice maintenance, since the rink users had already done it.

Ice maintenance: 10am, 4.40pm. At 8.45 rink users scraped the rink manually with the green rink scrapers.

The Christie staff have said they will cover the cost of ordering wood, so for now it seems that the woodstove will be used.

Ice maintenance: 1 pm and 7 pm -- only scrapes, because the flying squad says the ice is too cold to flood. The wood delivery arrived at Christie, with CELOS paying for now.

At 10 pm, when the transformer sprinkler system malfunctioned at Dufferin and Bloor, and 250,000 people lost power in the area, Christie Rink was spared! In the middle of intense darkness in the surrounding neighbourhood (including a long patch of Bloor Street and the subway line underneath), the rink lights blazed on, evidently on a different circuit.

A parent and her child came to skate, having apparently been told at the Bob Abate community centre that they could rent skates at Christie Pits. It might help if CELOS put up a sign with the January newsletter text:

CHRISTIE RINK SKATE RENTAL AND SNACK BAR: NOT THIS YEAR

Dufferin Rink staff, working on the principle of making good use of existing city assets, got involved with running Christie Rink this year. But it was tricky from the beginning. The week before the rink was set to open, an order came from downtown advising the removal of the rink wood stove on the grounds that (1) wood stoves in public buildings are against the fire code and (2) permission for installation had not been properly granted. Since neither of those reasons turned out to be correct, the wood stove was allowed to stay. But problems continued. Dufferin Rink staff had worked with CELOS and the Women of Winter Tournament to assemble a Christie rental skate collection. But it turned out that the Christie/Trinity Recreation supervisor was not happy with rink staff handling cash, so the $2 skate rental times were limited to two hours a week. That left out even the daytime school groups. The same limitation prevented the use of Christie Rinks kitchen for more than two hours a week. Doing a healthy-snacks rink café, to bring in more families and school classes and improve the week-night youth scene, takes more than two hours a week. Too many blocks! Too bad. So making good use of city assets, including unused existing kitchens (and under-used existing staff expertise) will have to wait for another season.

Ice maintenance: 11 a,m, scrape only. The rink closed at 8 pm because of snow and no maintenance (broken flying squad truck).

Ice maintenance: 11.10 plow and zamboni. Christie opened by 1pm. Another scrape at 5 pm.

Ice maintenance done before 10, but by 10 there was build up of snow from morning. 5pm scrape

Ice maintenance: no evidence of ice maintenance before 6 p.m. Scrape and flood at 6 pm. (Flying squad was hampered by a wheel problem on the zamboni truck in the afternoon.)

At 10.30, most of the large "Level Two Beginner" shinny hockey group was coming off the ice. Some stayed on, hoping to keep playing until the lights go off at 11. They looked exhilarated. Shinny hockey often does that, on a nice night with a black sky overhead and -- at Christie -- the big skyline, with the CN Tower tall and blinking to the southeast.

Lots of talk about the e-mails they've sent off to Councillor Janet Davis, asking for the Councillor to meet with us. Lots of puzzlement about the poor ice quality at the single pad rinks, like Christie. "It's rough, but then you have to expect that outdoors." "Actually, outdoor rinks can be really smooth, but they do need more than once or twice a day maintenance." ...And so on.

The Christmas tree is still up, but the gift-wrap on the pop machine is off. Now you can clearly see the "out of order" sign on it. Sad.