Campbell Rink: At 3.20 p.m. the ice looked good but there were no skaters. 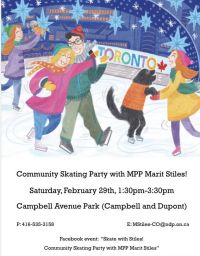 Hope you can join me & my team at our Skating Party this coming Saturday, February 29 from 1:30-3:30pm at Campbell Avenue Park.

There will be hot chocolate and cookies. And if you dont have skates, Campbell Park rents them (pay what you can).

Hope to see you there as we celebrate our community together!

There are still skates to rent for $2, but this year no one has been assigned to sharpen them.

This is one of two city operating rinks that's listed as "service alert: rink will be cleared of snow tomorrow morning."

At 8 pm it was damp and zero degrees Celsius. There were 10 hockey players on the ice. The rinkhouse was almost empty, just one hockey player.

At 11:30am the Really Free Market was taking place in the rinkhouse. There were four hockey players on the rink. 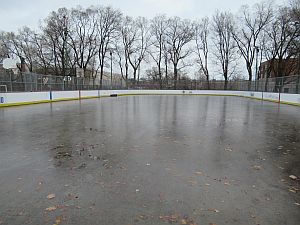 compressor on and ice forming 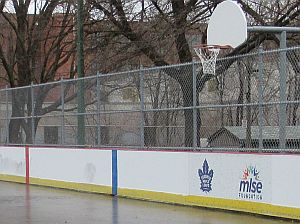 Maple Leafs and MLSE logo -- why? 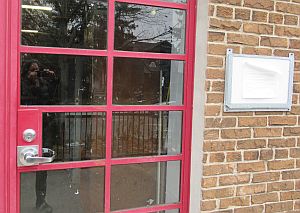 The rink machinery is running and it looks like the ice is forming (maybe because of yesterday's rain). There's no sign anywhere on the building saying when the rink will open. The city website says Dec.1

The MLSE and Toronto Maple Leafs logos are at many rinks all over the city, here too. The implication is that they funded something at Campbell Rink. But what?

Sounds like staff are being assigned to do a Caribbean-themed Family Day event at all three Ward 18 rinks (Dufferin, Wallace, Campbell) -- no posters yet. 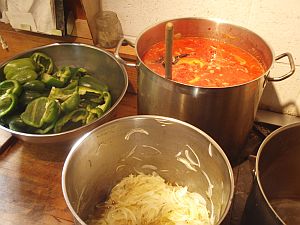 winter soup used to be cooked from scratch

The soup that the staff cooked at Campbell Rink in the winter used to be called "Campbell's Soup" as a joke. It was not from a can, it was cooked from scratch and it made the rink house smell nice and warmed the stomachs of hungry skaters.

But a few days ago, a skater bought a bowl of soup, and when he tasted it he went back to the snack counter and asked what kind of soup it was. It turned out it was Campbell's soup from a can. He was mad and handed back the soup so he could get his $3 back.

The staff don't get to make muffins from scratch anymore either, they have to use a mix. And if the rink attendant is working a "coordinator" shift, they are not allowed to cook at all. It doesn't matter if there's nothing else to do -- then the staff person just sits and waits for the shift to end. Or s/he can mop the floor again. And again.

It seems Parks and Rec moves more and more in the direction of turning rec staff into security guards.

Opening day of the rink coincided with the first-Saturday "Really really free market," which takes place inside the rink house in winter. It gets so full (today too) that people are limited to two hours of browsing. Lots of people there today looked like they were glad to get some things they need for free.

The 8 skaters out on the ice said the ice was good. The setup at this rink is awkward because when the flying squad brings a zamboni once or twice a day, they have to pull the big trailer over on the sidewalk and then later on drain the water right onto the ground -- there's no drain. When the Saturday campfires take place, people slip and slide along the ice left by the zamboni water. But it seems like people mostly manage. 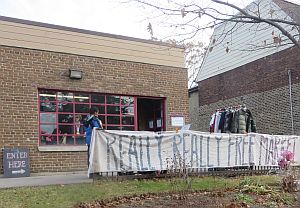 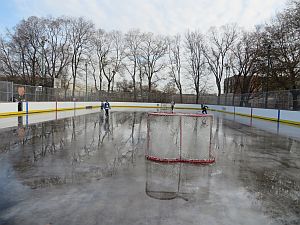 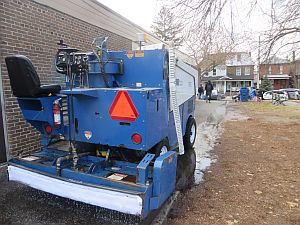 there's no drain, so zamboni empties onto the ground

Last day of this rink. No one seems to have thought of keeping it open for another week since Wallace has closed early due to mechanical problems.

The MLSE skate equipment donation is a bit of a mystery. The city councillor said she didn't really know the details; the Partnership office said they had worked on the lists of equipment needed, but it was unclear when. The rec supervisor said he has some boxes of skates in his office, that may have been there for a while already. Rink staff say they got new helmets a few weeks ago, but not skates. Dufferin Rink staff got 8 pairs of new skates to replace 8 pairs that disappeared over two weeks in early February. New helmets seems to have arrived earlier in the winter. Nobody is sure of the story, but one thing that seems clear is that there was no donation particularly linked to this event. The rink staff only heard about it a week ago, after asking their supervisor. Certainly this event was in no way local.

skate cupboard has older skates and some new helmets 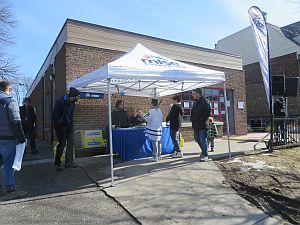 Despite the warm sunny days,this rink has been holding up well. There were postings citywide about an MLSE event here on Family Day, somehow connected with MLSE skate equipment donations for all three Ward 18 rinks. And indeed, today there was lots of hubbub at the rink -- music, tents set up, media, Darryl Sittler there to autograph free Toronto Maple Leafs shirts and toy hockey sticks. 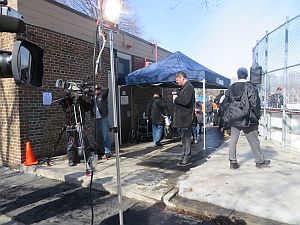 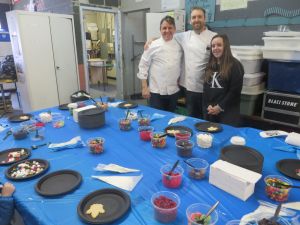 It's time to take a closer look at the Campbell skate lending program.

This rink has reverted to being a very local rink with an almost exclusively local culture -- i.e. a mix of staff and rink users, sitting around talking in the rink house, making accommodations on the rink pad, more or less ignoring schedules but still making it work for themselves and their friends. 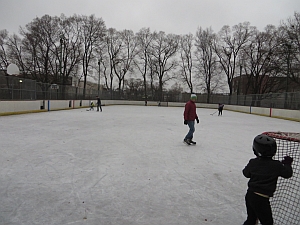 mixed group, both shinny and pleasure-skaters 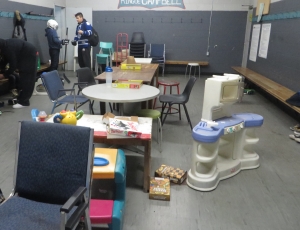 so many toys on the floor!

Ice making has started, maybe last night or this morning. 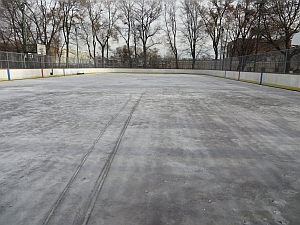 very thin ice, but hose marking shows they were flooding 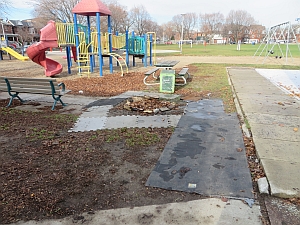 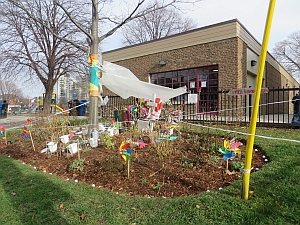 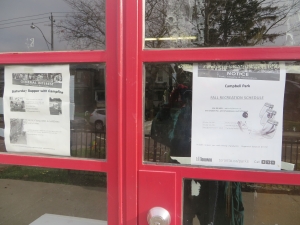 It's a warm day and most of the newly opened rink are water-covered or have closed for the afternoon. But the ice at Campbell is holding much better (maybe more water was put down?). The good ice means that more skaters are here than at neighboring watery Wallace Rink. But there's only one staff person to handle everything, while at Wallace, 5 staff are hanging around, with fewer skaters. At one time, staff were shared between the rinks so they could be easily moved where needed. But no longer.

The rink has opened for the season, but since none of the rink's had any opening day signs on them, nobody has come yet. Word will get around.

The big welcome sign in the changeroom says: Benvindo ao Ringue Campbell. Portuguese, because so many of the people that use this rink come from Portugal. Nice. 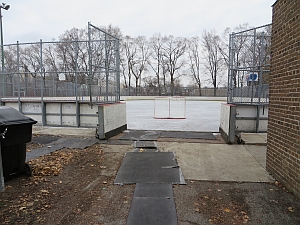 doors are open, ice is in 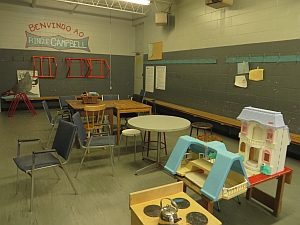 change room all set up 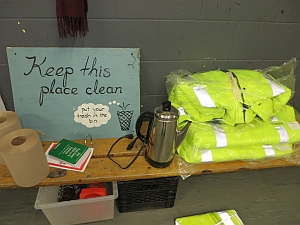 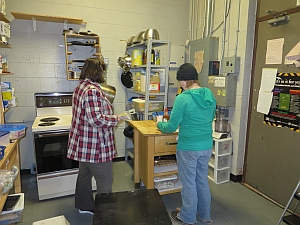 kitchen and cafe all set up

A plough and a snow blower can at about 11.30 a.m. The plough did a circle around the perimeter but left before ploughing the middle. The snowblower stayed and blew the snow about. At 12.15 the rink is still unskateable, although marked "operational" on the city's website.

All-day snow. The zamboni came only once and the rink was snow-covered, but the city's website continued to mark it as "operational."

A scene has been building up for the past week or so, with several youth trying out how far they can go at the rink. This evening Phil [not his real name] went out of his way to mock one of the staff and take cookies out of the cookie container when the staff's back was turned, laughing while he passed them to his friends. Later when the staff began to sweep the change room, Phil began laughing and mocking the staff.

The loud, public discussion for the evening centered around strip clubs, female body parts "snatches", and sexually explicit speculations about what what activities take place in the private rooms. At one point during the evening a heavy-set young woman came inside to wait for her boyfriend who was playing hockey. Phil and Gary [not his real name] took the opportunity to insult the girl and mock her boyfriend for going out with her.

The youth occupied more then half the facility, sprawled over 4 tables, yelling back and forth.

Raf [not his real name] is aggressive and foul-mouthed, instigating fights and taking other people's things. He bragged that he would come back next week and behave as he pleased.

Corporate security was called to be on-site for 9pm to help close the building, The officer stayed till 10pm as some of the youth were spotted waiting outside. 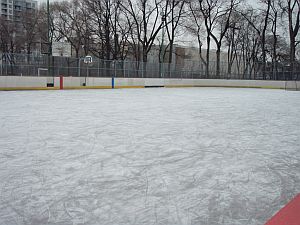 scuffed ice, but at least no cement

At 10.15 a.m. the ice was still scuffed from yesterday, no ice maintenance yet. A dad with his kids and their friends was just coming off the ice. They said the ice was very thin but they didn't hit any cement.

Campbell opened today with some very thin ice. Lucky it wasn't warm or sunny, or the rink wouldn't have opened at all. Normally established rinks are ok with the elements in November, but with only 2 days of ice making, it would have been alot worse. Today by noon the north boards were down to concrete and various bubbles in the ice had melted to into holes. Staff put stools with signs to mark the dangerous spots, and tried to patch any holes with a slush mix. 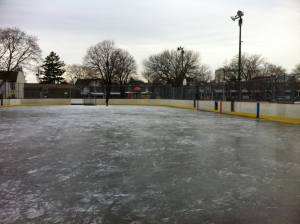 thin ice, good enough for a skating the night before 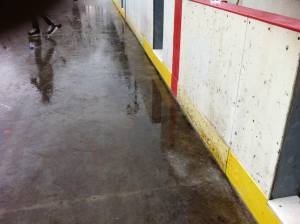 concrete against the north boards 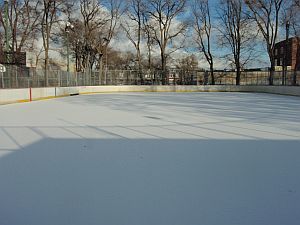 no flooding with only two days to go

The snow from Tuesday night was still on the ice. No flooding at all on Wednesday, and only two days until rink opening!

Lots of indoor preparations to get the rink ready to open. It snowed a couple of inches overnight -- program staff were waiting for ice maintenance crew to take the snow off and keep on flooding. 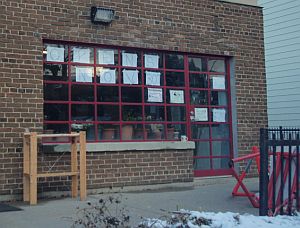 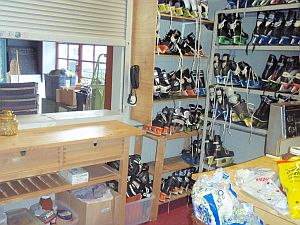 skates ready to loan out

In the morning, city workers arrived to keep working at the fixing the boards. Staff arrived after 3pm to start flooding the ice. There already was a bit of a base beneath since the rink normally pools water. The hose was one of the big heavy duty black but there was no attachment spray-head. So there was lots of water being laid down all at once in big puddles. 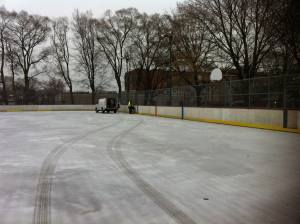 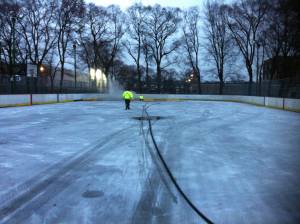 The compressors were turned on.