You are on the [January 2012] page of folder [Campbell Rink] 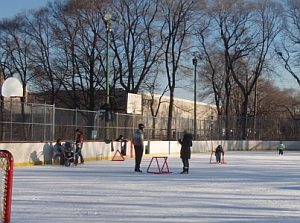 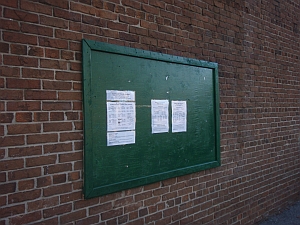 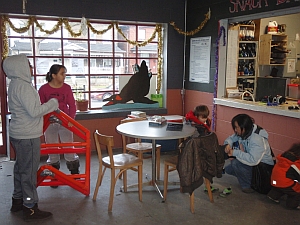 The first "Toddler skate" morning program, something the staff are trying out, 7 kids plus their parents/caregivers.

Report from staff: The campfire at Campbell was hugely successful. It was so busy that I hardly had time to look around, but when I did I saw that the rink was full of people skating, and the snack bar and skate rental were bustling too. I have only seen Campbell that busy once or twice before, and that only on special events. Ariel and I served a ton of hot chocolate off the fire. We also made popcorn and caramel sauce on the fire, gave out every last bit, and received lots of positive feedback. Someone brought marshmallows so a few kids roasted those as well.

The best part for me was overhearing multiple conversations where neighbours introduced themselves and started chatting while sitting around the fire. I also heard old friends thank one another for being invited to the park, and make plans to get together more often. Lots of folks discussed the importance of parks and public gatherings to the city while they sipped their hot chocolate. Three people who rented skates told me they were skating for the first time in at least ten years. Then of course, there was one of the boys helping the staff in the kitchen like the sweetest kid you ever met, and two of the girls wearing neon vests and being so helpful setting up the fire.

I think everyone who has put effort into Campbell over the years should be super proud of themselves because last night was a beautiful thing! 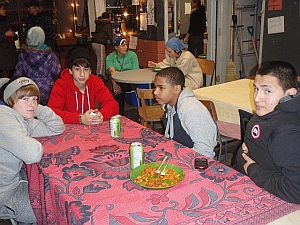 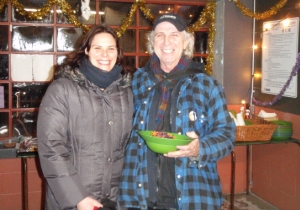 It was the first big Saturday Night Supper, after a whole bunch of little ones. The kitchen was jammed with helpers for much of the day, and they also served the supper. The weather was a bit raw, so there were not as many people at the Saturday pleasure-skating as usual. At 6 pm the rink house started to fill up, though, and by 6.30, every seat was taken. A very friendly scene, although the subject being talked about at many of the tables was troubling -- would the rink be shut down by a lockout or a strike in a week?

CUPE Local 416 Parks Unit vice-chair Paul LeGrand came for quite a while and answered questions. It turns out that long-time shinny permit holder Grace Vaccareli and he play on a shinny hockey team every Saturday as well!

Councillor Ana Bailao came for about half an hour, even though she was booked to go to two other events as well. She said that the councillors, like everyone else, have no idea what will happen next week.

The Campbell shinny hockey round robin. 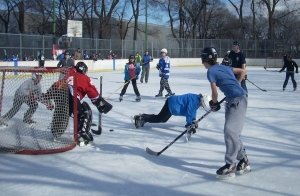 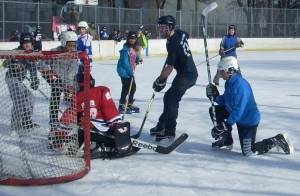 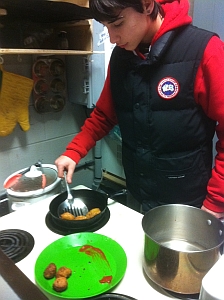 Note from permit holder: "...the Councillors office has agreed this week to arrange to get us a flood before our permit starts at 9 well see if that happens"

There was no ice maintenance until 7:50. I asked the zamboni driver why they came late and he looked at his watch and said they were early. I said I thought there was supposed to be a 6:30 maintenance, he said he hadn't received a call requesting maintenance.

I had tried to call from 6:50 onward. The zamboni driver did not answer his alert and the foreperson's alert indicated he was unavailable. The ice was bad for most of the afternoon. The zamboni came just in time for the permit at 9 pm.

Note from staff to permit holder: "keep in mind that the issue with us is that we want to strike a balance between permit and drop in shinny. Since Campbell only gets two floods a day, we will opt for a 10 am and a 6 or 7 pm. That way neighborhood skaters get some good ice after 7 and it's still skateable after 9 for permits. So my advice is - if you are asking the councillor for better ice - make sure you ask for 3 floods a day: the ideal would be 10 am, 5 or 6pm and 8ish." 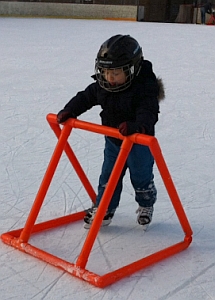 Note from rink staff Marina: "The funny thing about the girls who help out is that they get there at 8:30am to help with the toddler skate slot, but tell me they would never make it to school at that time. They shovel, they cook, they wash, they mop and they reorganize things. Last Sat. they were running late and phoned to tell me they were coming at ten to nine instead....There are others who hang out who aren't so easy to figure out. They are much rougher and older. They are not as interested in helping and they aren't invested in the place or the staff. They help occasionally when pressed." 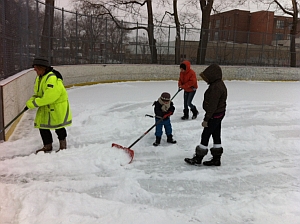 clearing snow off for toddler skate

Excerpt from e-mail from Jutta Mason to permit holders:

There are long-running problems with ice maintenance at Campbell Rink. This is partly because of the restrictions of the "flying squad" schedule. Here is an alternative proposal.

Campbell Rink is doomed to bad ice until the maintenance system is changed.

The proposal says that it's time to set up the (pilot) "rink conservancy" in Ward 18 (Campbell, Dufferin, Wallace). That can SAVE the city money and also bring Campbell Rink up closer to the ice maintenance standard of the six identical-size rinks in Etobicoke. Their ice is much better.