Rec staff closed the rinkhouse and left because there was too much water on the ice for skating.

11am scrape/flood (Zamboni stalled once during maintenance) - 1 pass along the edge - 3 passes through the middle
6:10pm Zamboni cleaned ice

About 20 people turned up for Monday pleasure-skating. 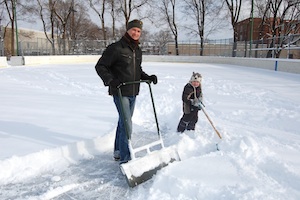 No AM maintenance. In the late morning, a father and son arrived at the rink and shovelled out a small section with the Campbell coordinator. After they left two of the young guys who play hockey at the rink offered to clear more of the ice. They worked for an hour before a large group of older shinny players arrived. They were anxious to play hockey and took over from the younger guys who were rewarded with hot dogs and juice boxes. Hand shovelling of accumulated snow started. Too much snow! Not enough shovels, and yet the rink users went around the neighborhood to ask for some.

When the plow arrived unexpectedly, at 15h15, there were still piles around the rink from the shovelling and the driver had a hard time moving them out. He tried, but left shortly after, around 16h00. The rink users finished off the job and got to play for only 45 mins. They were not pleased, even though the recreation staff postponed pleasure skating by a half hour, a way to say thank you. The pleasure skaters were confused about the delay until they learned that it was those shinny players that shoveled out the ice. Around twenty skaters showed up.

The flying squad zamboni arrived shortly after 4. When the operators asked the rink coordinator if they should clean the ice, the coordinator sent them away because he didn't want to cut into the short time the shinny players hae. Earlier there had been tension between rink staff and some of the hockey players who thought pleasure skating should be cancelled altogether, but when the players came off the ice a few thanked rink staff for giving them extra time to play

Hope you agree to this and can help communicate to staff. When park workers clean the ice they drive up from Campbell Ave and enter the rink through the west gate, which is next to the rinkhouse. When they are finished cleaning they exit through the same gate and then dump snow next to the driveway or outside the park.

After a short while the snow accumulates to the point where there is no more room, plus its a program area for campfires. In past years when that has happened, the drivers have opened the north gates and dumped the snow in the park where there is a lot of room. This year, however, the operators haven't wanted to open the north gates because it difficult to get them closed again. So here's what we've done:

At the moment the upper half (the chainlink part) is secured with a dowel and chain with a with a city padlock. If you can give your staff the keys that would be the first step towards consistently opening those gates to dump snow. (forcing the fixing of the gates would of course be the best thing...do you know where this is at?)

The recent snowfall created a rather large pile close to the north gates. You might want to get a plow to push this a little further back. Last night, the drivers did dump at the north gates which was great! Other times they dump outside of the park which only works if they don't have to drive back in and wash the machine.

I will instruct my staff to follow your request when possible for them.

Heavy snow fall. Great ice maintenance in the AM. Snow removed and ice skatable for school group by 11ish am. 8pmish scrape and flood. Dump in front of the the park.

Regular ice maintenance. AM and PM (around 6:30pm scrape and flood). Where did they dump the snow?? The far gates are still barely held together with dowel and chain combination. Work order has been in place for over a month now to get this fixed!!! 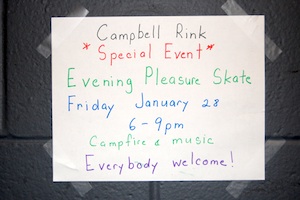 Back in November Campbell staff had a meeting with members of the community who are interested in the rink. An idea that came out of the get-together was the suggestion to have one or more evenings of pleasure-skating with music. After checking the schedule to avoid any conflict with permit groups, staff found two possible dates: New Year's Eve and Friday January 28. New Year's Eve didn't work out because December was a crazy month for rink staff. January was pretty busy too and staff had second thoughts about holding any event at all, but in the end decided to go ahead. Pleasure-skating time slots at Campbell are normally two hours, but because Saturday and Sunday skating usually get good turnouts, staff decided to see if a three-hour event would attract enough people. On Saturday staff put up hand-written signs advertising pleasure-skating with music 6-9pm on Friday January 28. Staff also made a point of talking to skaters. Staff say they got a good response so it will be interesting to see how many people show up next Friday.

Another good turnout for Saturday pleasure skating. At 5pm, staff counted 32 people on the ice.

When staff arrived in the morning they saw workers had painted over the graffiti that has been in the men's washroom since last season. There were wet paint signs next to the stalls that had been painted over.

Most of the day was quiet with only about six hockey players showing up each hour. Twenty people came for pleasure skating.

In the evening, staff replaced most of the hand-written signs for next Friday's skating event with nicer printed ones. 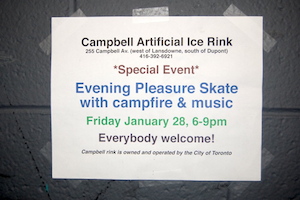 The rink lights didn't come on in the evening. A park worker came to turn them on.

Staff put up 100 signs in the neighbourhood advertising this Friday's skating event. Staff also stopped at some local businesses including Sweet Pete's Bike Shop on Bloor, Starving Artist on Lansdowne, Boo Radley's on Dupont and at Ubisoft, a software company that recently moved into the building on Wallace that has the water tower. Ubisoft employees come to Campbell on their lunch hour to play hockey. The receptionist was enthusiastic and said she would bring some of her co-workers on Friday. 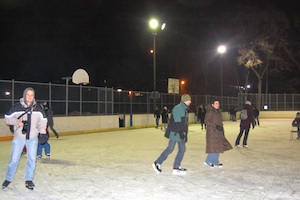 Staff arrived early to prepare for tonight's skating event. In the afternoon a group from Perth school came to the rink for a skate.

As staff got ready for the evening skating party, they weren't sure what to expect. On the one hand, people they had talked to during the week had shown interest. On the other hand, it took a long time for the Saturday pleasure-skating time to attract a steady crowd. The rec workers were a little afraid that they might spend the evening protecting empty ice from disappointed hockey players. Just before 6, one of the young hockey players said half-jokingly that if noone showed up for skating he was going on the ice regardless of what rink workers said. 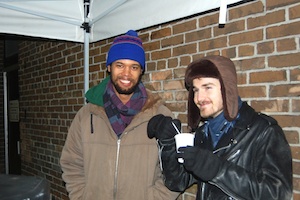 Alain and Dave by the sound system
Click to enlarge

Staff breathed a sigh of relief when the first skaters showed up right after the hockey player had spoken up. Seeing the skaters, he said "You mean people actually come out for this stuff?" It turned out to be a busy event with people coming and going throughout the night. Staff were kept busy renting out skates, proving once again the value of the $2 skate loans offered at Campbell, Wallace-Emerson and Dufferin rinks. Many of the skaters were regulars staff know from the Saturday and Sunday pleasure-skates, but there were also people new to the rink. Some said they came because they had seen the signs staff had put up earlier in the week. There was a large contingent from Ubisoft including the receptionist who had been so enthusiastic on Monday. Some families heard about the party from the children who had come skating during the week with Perth school.

Yo Utano, who works as a cook and baker at Dufferin Grove Park, made onion soup which she served by the campfire set up next to the rink. Alain Heese-Boutin, who is one of Campbell's regular staff, manned the sound system while his friend Dave DJ-ed for part of the night.

Brenda, who comes out most weekends to skate, celebrated her birthday at the rink, bringing along many friends including some who rarely come to skate. She also brought chili which staff served at the campfire. Pleasure skating was very busy with staff counting more than 80 skaters.

Only two people came to the rink for the after-school pleasure-skating time slot.

A quiet evening at the rink. Another poor turnout for Monday pleasure-skating with only two skaters showing up. 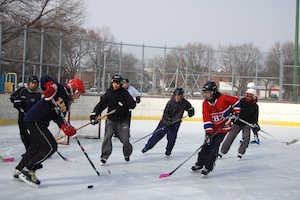 Action in front of the net
Click to enlarge

Today Campbell hosted a shinny tournament organized by staff for youth, 10-14 yrs old. Twenty boys signed up and staff worked out a schedule based on four teams of five. However, only sixteen boys showed up which was enough for two teams with substitutes. (Girls were, of course, welcome to participate, but none did.) Despite the lower turnout, the tournament was a success because the boys who did come were able to play moderate-paced shinny all day long. Campbell attracts a lot of good adult players which means the hockey is usual fast. While some teenagers can hold their own with the adults, others find it hard. They either end staying behind the action during games or giving up altogether. Today staff knew the boys were having fun because they kept wanting to play even thought there only two teams. They seemed to like the idea of having referees. The officiating was done by Daniel who had refereed a an earlier youth tournament and Andrew, a current rec staffer. The main organizers of the tournament were Alain and Yann, two other city recreation workers. King Slice, 1578 Bloor St. W, generously donated pizza for the tournament. 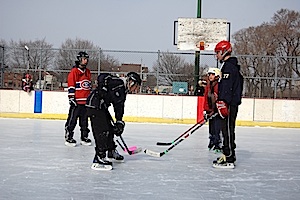 When staff made the schedule for the day, they thought the tournament would last longer than it did. They put up a sign saying Saturday pleasure skating would start one hour later, at 5pm rather than the usual 4. Although the tournament ended eariler, staff stuck with the 5pm start time because that was the time they advertised and they had already told some shinny players, skating wouldn't start until 5. At 4:30, a family that often skates on Saturday arrived with friends. They were disappointed to find out about the late start and didn't want to wait. Staff suggested they go to Wallace-Emerson. They did and later told staff they enjoyed themselves. However, they also pointed out that noone had put the schedule change on the rink website, an unfortunate oversight.

There was a small but steady of stream of hockey players during the day. There was also a good turnout for the 1-3pm pleasure skating time slot with about thirty people at a time coming out to skate.

It was Family Day and staff opened the rinkhouse at 10am. They day wasn't too busy but there were about a dozen hockey players at a time at the rink including some people who aren't regulars. There was a good turnout for the 3:30-5:30pm pleasure-skating time slot, which was a relief for staff who over the last few Mondays had found themselves protecting near-empty ice reserved for skaters. This Monday, however, 35-40 skates, mostly families, did show up. The rinkhouse was full of lively toddlers and baby strollers. Staff did a brisk sale of hot chocolate, cookies and apples.