From rink user J.T.: I am the parent of 2 girls (5 and 8) who enjoyed the skating season for the most part but were sorry that Saturday mornings were taken away as we like to come before lunch. We found that the rink club house was not open at 10 am but that was manageable as we put the skates on outside but we would have to leave earlier to go to the washroom.

I was wondering if the Saturday pleasure skate would be busier if you did it at lunch time as more parents with younger children might show up. The kids can't wait until next year. 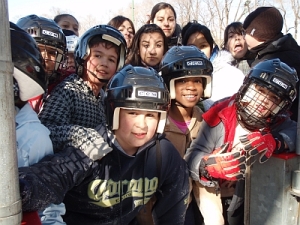 The day started out at -18 celsius, so the rink staff thought the class from St.Rita's wasn't coming. But at 1 pm the temperature had climbed to -12, and it was brilliant sunshine. So their principal let them go. The rink staff had stayed at the office for a meeting, when they got the call from the teacher -- "we're here, but the rink change house is locked -- where are you?"

So Michael Monastyrskyj jumped into a cab and got to Campbell as fast as he could to let the kids in. Then he put on a big pot and everybody had free hot chocolate. The kids put on their skates and played around on the ice, in the snow, and back and forth in and out of the rink house -- checkers, chess, cards, skating again, joking, talking -- a very nice afternoon at the rink.

Shinny tournament day for 15 to 20 years old. The forecast was for freezing rain turning to just plain rain all day long. There were a few breaks but mostly the forecast was right. But the tournament went on anyway -- seven teams, two refs, one guy thrown out of the game for raising the puck again after he was given a warning. The hockey was FAST, and wet by the end of the day. 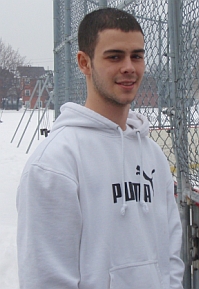 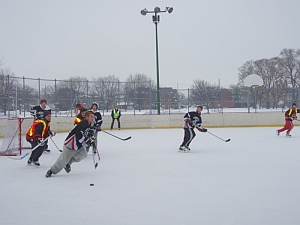 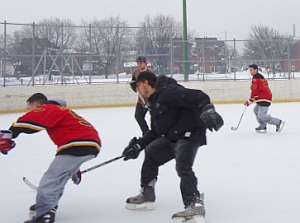 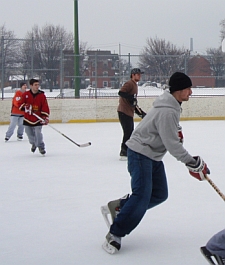 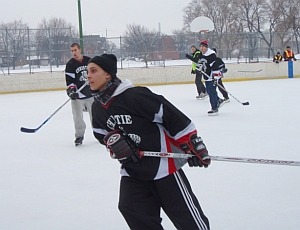 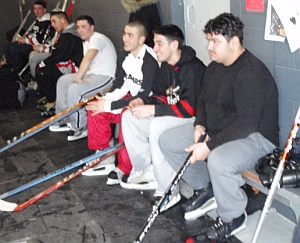 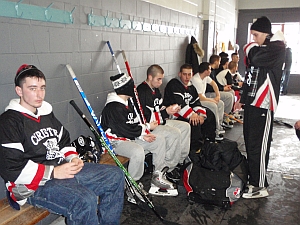 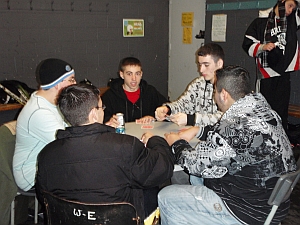 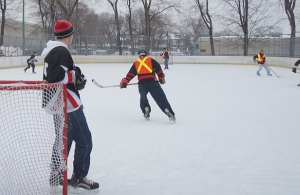 A beautiful sunny day, good ice, campfire made, free hot chocolate ready -- and a turnout for the pleasure-skating time of only about 10 people. Go figure.

It was more people on the rink [yesterday] than I have seen for entire years of pleasure skating. The hockey guys started to get a bit rowdy towards the end but that is easily fixed. (people with small kids dont like teenagers screaming from end to end trying to take each other out).

Things will get better with time and I think the two most needed things are respect for non-hockey skating and prolonged commitment. Down the road better outdoor seating etc will come if the demand stays. [Scott Dobson]

From rink staff Anna Galati: there was a good turn out at Campbell today, about 50 people for the 4-6 pleasure skate (wish I had a camera). A few regulars I recognized from last week, and some who just came by for the campfire.

One man introduced himself and said he was glad that we were there.

I am glad to see that finally people are taking interest in Campbell rink (and park I hope). When I moved to Perth 6 years ago my wife and I were really excited about having a rink near by for pleasure skating.

Our hopes were dashed when we discovered that the rink had been taken over by hockey people 24/7 and that the staff seemed unwilling to enforce the meagre pleasure skating hours. We had hoped that by attending regularly people would start to get the idea but we found the staff uninterested and the hockey people to be verbally abusive and unwilling to follow the posted times. There were many occasions small children were trying to skate while hockey people, sometimes adults, took slapshots.

I tried to encourage the idea of having community days and hot dogs etc but the staff didn¹t seem interested and could not make the mental leap from multi use rink to healthy community. We gave up and started driving to Harbourfront where the healthy outdoor message is understood. People, basically men, will not play hockey all their lives but people do have the option of pleasure skating their lifetimes and this message cannot get out if families, small children especially girls, are too scared to take to the ice.

I am really happy to see new interest in this rink and hopefully this is a sign that times are changing. I am going today with my neighbours, to send a message that wasn¹t being heard, that there are a lot of people in the hood who want more than just hockey and see the rink and park as a resource for the community.

On Wednesday, January 16th St Josaphat School's grade 5s and 6s came out to the rink and had a great skate. 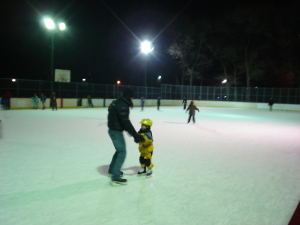 This Saturday Jan 12 at Campbell rink was lots of fun. About thirty or so skaters of all ages came out and enjoyed the great weather. There was a campfire to warm up by and free hot chocolate and hotdogs all around. A few shinny players (two in goalie equipment) stuck around and took in the tunes and leisure skating.

What is your favourite song to skate to? You can email your requests of for next Saturday's fun day to [email protected]

Many more fun days to come! Every Saturday from 4-6pm at Campbell Rink.

As a recreation worker, your job is to clear the ice for permits. It is very important that you do this, so that you can answer questions from other shinny players about what is happening. You can direct shinny players to other rinks like Wallace and Dufferin who always have open shinny after 9pm. If you ever have any questions or are not sure about what to do, you can call staff at either Dufferin or Wallace for clarification or advice. What's important is that you interact with all rink users. You are the mediator, so you have to be proactive in communicating with everyone.

It will be interesting to see what happens next -- a clash of cultures.

Ice was pretty good, and there were a steady number of shinny hockey players all day. Hot dogs and hot chocolate and cookies inside, plus kids playing checkers and chess, others watching. Right across the street there's the most dazzling Christmas lights-display, shining right into the rink house.

There was some snow turning to rain in the middle of the day -- no ice maintenance again until 9 pm -- before that, the rink guard Jimmie had shoveled off a lot of the rink by hand -- when he was done, the plow came and left a big bunch of snow right in front of the gate so it couldn't be closed. Nobody bothered to try and skate.

Boxing Day. The zamboni came only once but the driver went over the ice two times and afterwards it was good again. By 1.30 there were seven shinny players, with another seven changing into skates. They said they love Campbell Rink because it's not so crowded, "but don't tell people about it!"

Christmas Day. The rink was in such bad shape that it had to be closed. 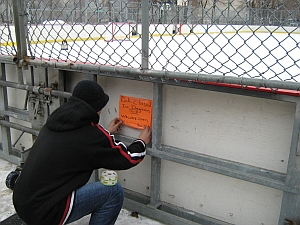 There were holes and gouges all over the rink. One young man skating there said he's been coming to the rink all his life since he lives around the corner, and he never saw it this bad. The problem was that after the plentiful rain two days earlier, no maintenance had occurred before the rain froze, making a lot of shell ice all over the rink. The single visit by the zamboni on the next day did not fix the problem, and then on Christmas Day no zamboni staff were booked. The ice surface was full of holes, underneath a thin layer of snow, so the rink was unavailable for three days instead of one. 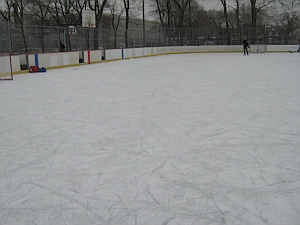 ice surface was full of treacherous holes because of shell ice 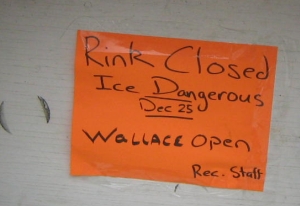 too dangerous for skating

10am: Opening day: No signs of ice maintenance. No nets on ice. Women's washroom is 35degrees C and the heater is still running. Office heater runs non-stop so staff turned off the breaker.

12 noon: rink operator came with the plow truck -- used the plow to move the snow/ice pile near the campfire spot.

1 pm: ice flooded, went over it twice and the ice was really good afterward.

Lots of older shinny players used the chess and checkers (who knew?)

Rec staff were asked by rink maintenance to salt the road leading to the ice (zamboni path), and were told that rink maintenance would return later to clean the path with the plow. This confused staff, since the Parks supervisor had said never to salt that path since the zamboni picks is up and makes the rink surface bad. Also the rink maintenance staff never returned to plow the salted access path.

Staff said that only 3 pleasure skaters came during the pleasure time. They were happy to use a corner and did not want the shinny players (about 17 of them) to be kicked off. They were adults  two of them were learning to skate.

8 pm: second flood. No permit so local shinny players had a great evening of shinny hockey.