You are on the [CampbellSkateLending] page of folder [Campbell Rink] 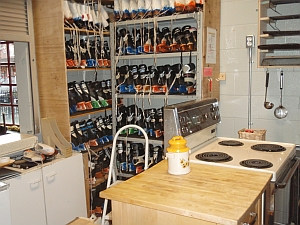 This skate loan program began in 2007, using skates that were extras at Dufferin Rink and others that were extras at Wallace Rink. In 2011, when the new kitchen was put in, there were shelves for lining up the loaner skates. It was an odd set-up -- skates, sometimes with bits of snow still on them after they were returned, lined up near food cooking on the stove.

The skates cost $2 a pair to rent and there were also a few sticks that could be rented, and sometimes some hockey gloves. This rink is mainly used by people from the immediate neighbourhood, so the equipment was traded around fairly freely. 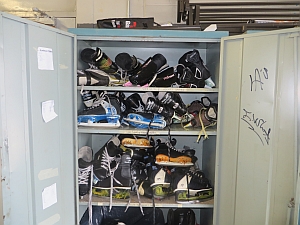 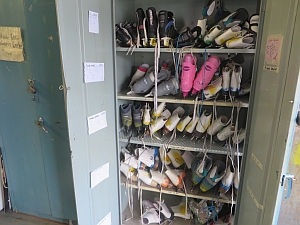 In 2014, the set-up was changed to make more room for cooking. The skates were taken across to the other side of the change room and put into two metal cupboards. Those cupboards were overcrowded and often messy, but they served.

In 2016, the skates don't get a lot of circulation and they get indifferent sharpening, but they're still there.