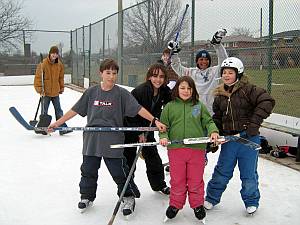 Saturday afternoon at Buttonwood Rink.
Click on picture to enlarge it.

2:30pm About a dozen boys and girls are playing hockey. They look like kids playing baseball in the back field, just messing around. The big difference is that this pickup game depends on a 50 horsepower compressor and the machinery to clear the ice. A whole city bureaucracy is needed to set these friendly, goofy kids up in their play area. Some of them don't even have skates.

We ask them if we can take their picture, and tell them they'll be posted on the cityrinks.ca website. This interests them for half a minute -- being on TV would last a little longer -- but then they return to their game. Two of the three girls are goalies, and they get frustrated with each other if they let the puck through. The boys flash up and down the ice and don't seem to take anything very hard. 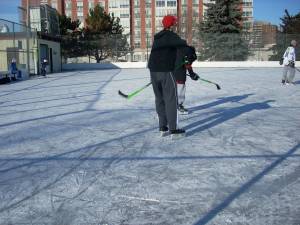 1:45pm This is a shared-use rink where shinny players and pleasure skaters use the ice at the same time. A city worker at the site says this is an "off the track place. There's nothing here at all." During our visit there is a lively game of shinny involving ten players. There are also a few pleasure skaters, but the rink is largely empty despite the huge housing development nearby. A CELOS researcher spoke to a woman who brought her daughter here to skate. The woman says she used to skate here as a child. She says it was never busy and she brought her daughter here because she knew it wouldn't be crowded.