We went to see a covered rink for ourselves. This was the day after a biggish snowfall, and we were surprised to see four rink staff shovelling out the snow on the walkway between the changerooms and the rink. We weren't expecting snow under the roof. The rink manager, John Pogue, was there, and he said -- remember, snow blows sideways too!

Which is certainly true.

He told us that after the big snowfall, the zamboni driver worked from 6.30 to 10 a.m., taking off about ten loads. Then the rink re-opened.

That surprised us too. The same snowfall was cleared off quite a few un-roofed rinks in Toronto by about the same time. The main difference was that the city's rinks were ploughed out, whereas at the covered rink the snow was taken off solely by their zamboni. 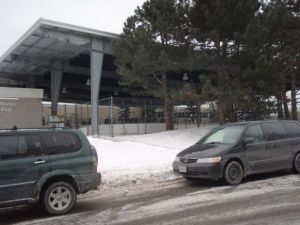 street parking allowed by the rink 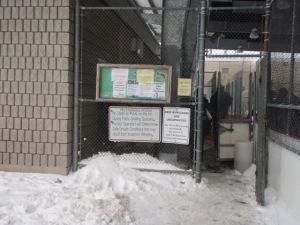 lots of room for rink information

The rink has clear information, readily accessible, posted on the fence and the bulletin board. We were surprised to read there that the rink season is exactly the same length as Harbourfront's Natrel Rink and the scheduled season for fourteen other city outdoor rinks. Opening in the low-sun month of November is no problem for uncovered rinks, but March is a real challenge. We asked the manager: "how come your covered rink doesn't stay open for March break -- surely it could, with the roof keeping the sun off?" He said -- "there's not the same demand for skating as in the earlier winter." That's exactly our experience with the city's outdoor rinks -- by the time March comes, even it it's cold and overcast and the ice is excellent, attendance drops right off. People are just tired of winter. 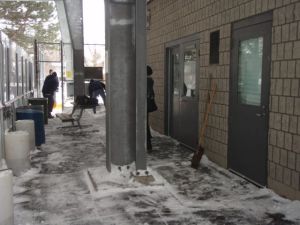 clearing the snow on the walkway 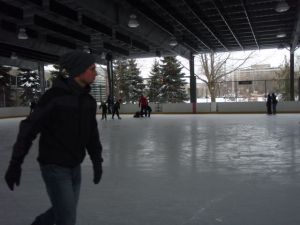 free skating 10 am to noon weekdays

There were parents and pre-schoolers at the rink, maybe some students too, taking advantage of the free pleasure-skating time between 10 a.m. and noon. The two small change rooms were clean, brightly lit and utilitarian. One of them has a hatch with a metal curtain. The manager said it used to be a snack bar but not any more. There is no explicitly social space -- the rink is set up for skating, not sitting and talking. 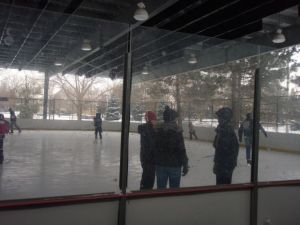 plexiglass barrier instead of chain link (but a little scratched) 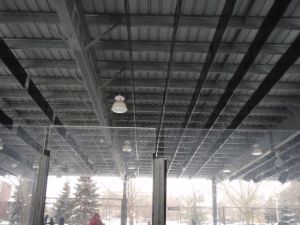 There are plastic sound baffles hanging from the steel roof girders. The manager explained that the rink roof used to funnel noise into the neighboring houses, but the baffles have helped a lot. 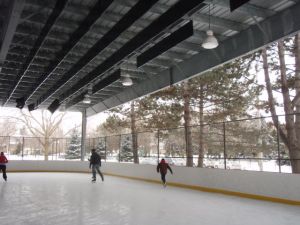 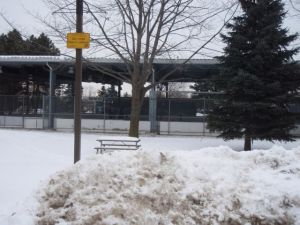 The rink had a sign saying it was built in 1978, but the roof was only added seven years ago. In Mississauga, the rinks have to cover their costs, so there is no prime time drop-in shinny hockey at all (only during daytime weekday hours), but there are seven hours of free public pleasure-skating on weekends. Otherwise, the rink is used by permit groups. To find more customers, Burnhamthorpe Rink has developed a powerpoint presentation