City Councillor Denzil Minnan-Wong's annual skating party, from 2.30 to 4.30. Before the open skating, there was a permit, comprising 7 youth just shooting a couple of pucks around. None of them except the goalie wore helmets. Perhaps permits can set their own helmet rules, because they don't fit the "supervised shinny hockey" category. (At Harry Gairey Rink it's the opposite rule -- drop-in shinny players don't tend to wear helmets but the permit skaters are told they must wear them.)

My three-year-old grand-daughter went out on the ice pushing a little stool, and the rink guard skated right over, saying, "sorry, not allowed." I told him that if she doesn't have the stool, she can't skate. He said, "no, the stool is fine, but you're not allowed to be on the ice in shoes." I stood against the boards and watched as my grand-daughter skated around the entire rink pushing her little stool, telling the rink guard, "I'm sorry, but I have to keep my eyes on her." He let me, uneasily, "I'll get in trouble with my supervisor." 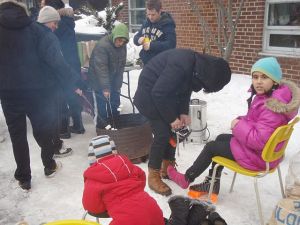 The Dufferin Rink crew had brought equipment for a campfire, and kids were roasting marshmallows and drinking hot chocolate. The crew also brought skates, and even some of the adults wanted to try skating. But the rule was that no one could push a chair, nor was our skating instructor allowed to be helping people on the ice with shoes on. So the beginners gave up and put their shoes back on.

There was a very friendly scene around the campfire, though, and inside the councillor's staff were giving out hot dogs. Lots of people.