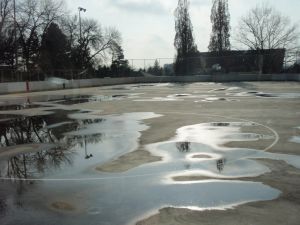 no attempt to make ice

Overcast. This rink will not be opening on schedule. The rink had only a few puddles of water. The compressors were turned off. The staff in the building asked if I was looking for a permit. He said that they had decided to keep the compressors off since they only had 100 Hp which would not be enough to keep ice in this weather. He said that maybe they would try again next week depending on the supervisors there.

Sunny. The rink operator/caretaker was in the office and another staff person also. The operator said that it would be impossible to make ice and they were not going to attempt it until it gets cold. He also said that the plexiglass barriers around the rink result in less air circulation, which makes it even harder to keep ice in.

According to both the voice message on the phone, and a rink operator reached later, Broadlands is open and the ice is in good condition.

At 11.30 there are 18 shinny hockey players on the ice, all of them wearing helmets. The friendly zamboni driver invites me into his office and we chat about when we came to Canada (he by plane, I on a boat). He tells me that he's good at extracting pucks that get stuck in the zamboni agur -- and I can well believe it. He's been doing this work for several decades, and he takes pride in the rink.

Hi, I was just wondering what the schedule is for adult shinny hockey. Thanks.

I'm sorry to tell you that according to the City's skating brochure http://cityrinks.ca/wiki/uploads/ListOfRinks/Skate2010-NorthYorkWeb_NorthDistrict.pdf, if you work normal hours, there is no drop-in shinny hockey available at Broadlands at all.

The hours for all-ages shinny hockey at Broadlands are only in the daytime, and only on weekdays: Monday, Wednesday, Friday from 1p.m. to 3.30p.m., and Tuesday, Thursday from 9 a.m. to 1p.m.

The cityrinks.ca website is not a municipal website and we have no say in scheduling. However, I can tell you that there are many outdoor compressor-cooled ice rinks in the city that do have drop-in shinny hockey on evenings and weekends, some as many as 35 hours a week.

I have cc'd Kim Hussey, the North York community recreation programmer, and Councillor Denzil Minnan-Wong, your city councillor, in case they have some clarifications to offer for this unfortunate state of affairs at Broadlands.