From S.P.: I got to Broadlands around 1:30pm and the rink was open so I went in and asked if I could play and he told me that its leisure skate time but since theres only one other guy, and he's playing shinny, you can go on. He told me that he was flooding at 2:30pm and that from 2:30pm - 4pm he was leaving for no apparent reason and he was locking up the rink so I'd have to come back at 5pm to play shinny for 13 and up. Nobody told me I had to wear a helmet when I went on. But later when I asked him about their rules with helmets he said that yes they do enforce it for shinny, and all the time for children of 6 and under. I told him that I want to come back but I wasn't interested in wearing a helmet. He told me sorry but those are the rules here, it's a city policy. So before I left I told him he should check up on that, cause the city isn't allowed to enforce that rule. That was pretty much it. Other than that the rink is very nice and the zamboni driver was very friendly and the whole place was in good condition.

Councillor Minnan-Wong's annual skating party. The councillor's office printed 4000 flyers and put them into all the nearby schools -- BIG response, so many people love skating. 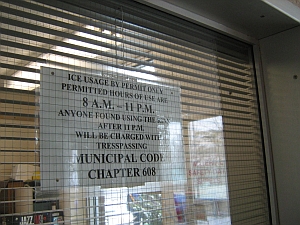 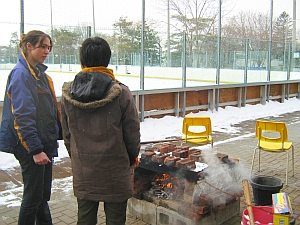 oven is warming up, but rink is still locked 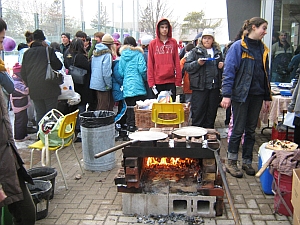 crowds grow after the ice opens 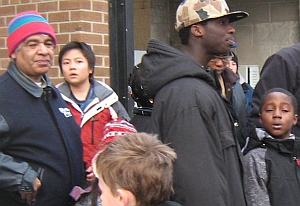 line-up to get on the ice 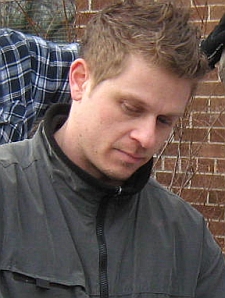 Mark Wilson has run out of hot chocolate 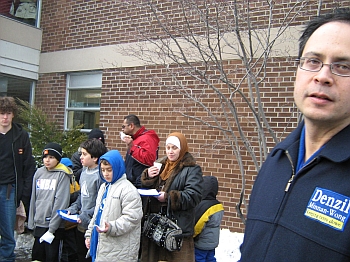 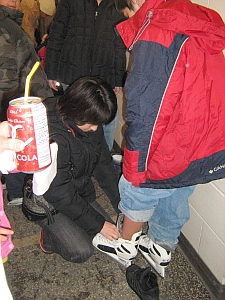 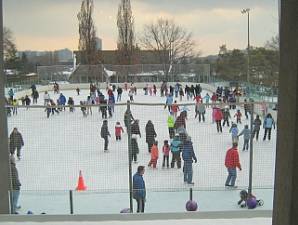 view from the community centre window 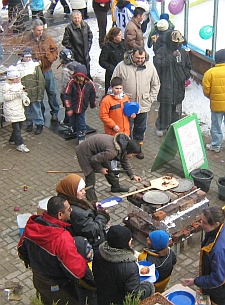 temporary oven from above 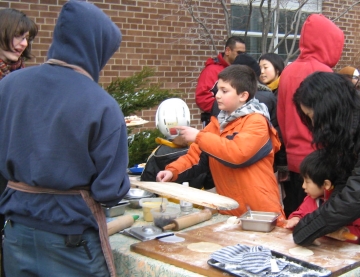 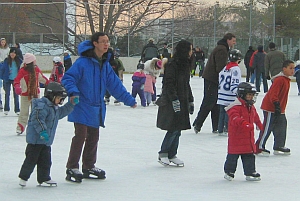 Some suggestions for the rink, from the visiting pizza oven bakers:

2. Ask the zamboni driver not to do a flood in the middle of the public skating time. 2 hours is not that much time. Many rinks go days without a scrape or flood, which is not good, however every two hours is excessive on a special event day, meaning everyone has to leave the ice and some just go home.

3. The permit before the public skating time was 35 minutes late, so the ice was empty even longer. People should not be permitted to keep permits when they don't use them.

4. There should be many more public skating hours.

5. It would be good if the rink staff could provide basic information sheets about other local rinks and skating programs. During the skating party there were many people looking for lessons and skate rental locations, skate sharpening locations, stores that sell skates, etc. The Broadlands staff should have some information about their nearby rinks and other useful facilities. This should be the launching point of good local skate programming.

7. Rink staff could be included more at such events, they could help.

8. Supplies ran out too soon and it's probably good to accept that people come to these events trying in part to get their taxes back by eating free things, be prepared for a successful turnout and make sure people are available to respond to situation as it changes: so that at 3.30pm someone could notice they're low on hot chocolate or cups or hot dogs and get more in advance. Also maybe have coffee, to go with the doughnuts?

9. The yellow bar that blocks cars from hopping the curb up to the community centre also blocks skaters who want to use the rink.

10. It would be good if the Councillor went out on skates!

From Dufferin Grove skate lending group: "All skates were returned and one family even donated a good quality pair for 3 year olds! Lovely honest people."

From the CELOS visitor:

When asked why they don't make the rink much more available to the public, the zamboni driver said they tried that a few years ago. But there was a fight on the ice so they cut the hours back again.

During the skating party, when asked if seeing all those people on the ice made him want to open the rink more of the time, the zamboni driver said, "no!" And you can sort of see his point -- a rink that has so few public hours can get far too crowded if people mainly come out to a special event. Special events are exciting but also frustrating for skaters. Better to make the rink available often, so that people don't all have to come at the same time.

2-4pm The rink is open for public skating. Two small, but clean coed changerooms are available. There is permit hockey before and after the public skating hours. The Zamboni floods the ice before the public skate. Skaters have to wait for ten minutes before being allowed on the ice. First a supervisor discusses the state of the ice with the Zamboni driver. (Friday's public skate, which was busy, ended early because of rain.) After the discussion about the ice is finished, skaters still have to wait for the rink guard to appear. At 2:15pm a dozen skaters of various ages go on the ice, but more people are arriving. By 2:30, there are 40 skaters on the ice. By 3pm there are 70. Over the next hour, the number of people on the ice gradually becomes smaller. By 4, there are only 20 left. Two rink guards and a teenager who is a regular skater say a turn-out of 70 is exceptionally high. Most Saturdays there are only 15-20 skaters. For the Friday public skate the usual number is even smaller. The skaters are of all ages, but most are parents with their children. It is a family atmosphere. Most people seem to be in a good mood. There are a lot of conversations on the ice. Many of the people on the ice greet each other as familiar acquaintances. Almost everyone is speaking English, but Spanish, Chinese and Romanian can also be heard. Easy listening music (CHFI) is being played over a loudspeaker at the community centre, but it isn't loud. At the far end of the rink, the music is easily drowned out by the scraping of skates. At 4pm, there is an announcement over the loudspeaker informing people that the public skate is over. After the skate, the rink is scraped and flooded. (The Zamboni makes two separate passes over the ice surface.)