You are in the Brickworks Skating Trail folder

Skate rentals at this rink: how it works

This rink is not operated by the City of Toronto

Equipment and Maintenance: A tractor with an ice-resurfacing attachment

The Brickworks website says that on Wednesday nights, 5:30-9:30pm from January 16 to February 20 they're doing "Winter Wednesdays," when the public can Skate under the stars on our picturesque outdoor skating rink, grab a hot chocolate or something stronger at our Sipping Station and cozy up around the fire with some street fare from our food trucks.

They are also advertising "a day of family fun" on New Year's Day from 10 a.m. until 5 p.m.: Take a spin on our skating rink or a walk through the park. Grab a bite to eat from Toronto food trucks and vendors and afterwards, something hot to drink from the Sipping Station.

The rink opened on Dec.1. The web page says that it's the most picturesque outdoor rink in Toronto -- it's also one of the smallest. But it's certainly unusual. It's back after being closed for a year because of general construction at the Brickworks. The web page advertises private skating lessons and says it's only open for public use on the weekends (but what about Wednesdays?). So it seems like this rink is more along the American model.

THE RINK IS CLOSED FOR THE SEASON.....read why 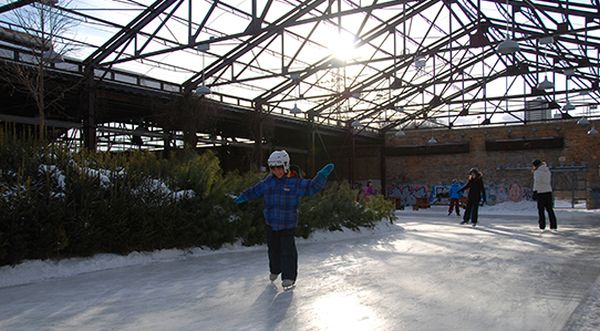 The rink is open, and smooth.

"The issue is with the beams overhead  once the rain stops, it keeps dripping (as well as frost melt in the morning), so we get small mounds and lines all over the ice  up to an inch high. The ice itself is fine  we just have to control these lumps!"

The outdoor ice-maker's road is never without challenges. 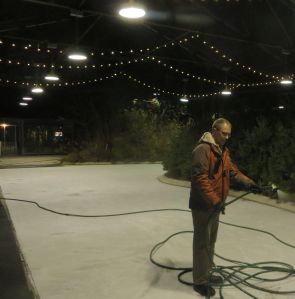 - The #1 rule of ice making is to do it at night. It is important that there is no sunlight. Sun is a bigger factor than temperature for optimal rink conditions.

-We could start when it is up to 9 degrees outside, with the EcoChill unit going.

-Use hoses and a fine spray/mist to start the ice so that the mist freezes to the pad.

-Leave the mist for 45 minutes, then repeat.

-The City used to do 2 evenings of this, building to less than half an inch, and then using the Zamboni for the rest.

-We should plan on making our ice at night over 2-3 nights with a team of people.

-Maintenance: When it rains, use the Zamboni to sweep the ice (no water) or use hoses to pull the water off.

11 p.m., message from the ice makers: "We got 6 passes in, and now it's raining so we're walking away for the night, but it's looking great."

The rink is open on New Year's Day and so is much of the rest of the building. It's lively and comfortable, and full of people, while elsewhere in the city many public facilities are closed for the holiday. Really.

There are four rink staff: two at the skate rental, one driving the zamboni-tractor, and one back and forth between the rental and the rink. The staff say they all know how to do mostly everything -- groom the ice, sharpen skates, drive the zamboni-tractor, help out skaters and keep order. They work in other parts of Evergreen when it's not rink season. They seem to be well-informed and to get the whole operation.

The rental skates are all donations. Many of them look in very good shape. The staff say the rentals have been going for about 4 years and so far they have never bought new skates. The rental income -- $5 for skates, $5 for helmets, $5 for skate sharpening -- goes into general rink revenues.

So this rink seems to have many of the good attributes of Harbourfront's Natrel Rink, and -- happily -- few of the problematic aspects of most municipal rinks. 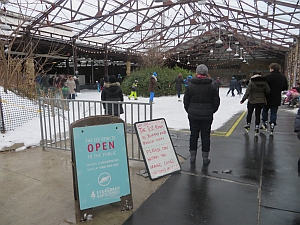 the rink is open, says careful on bumpy ice 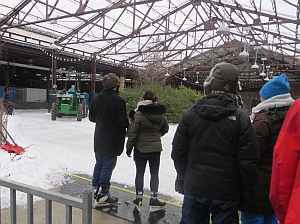 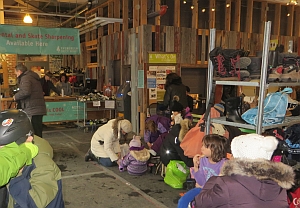 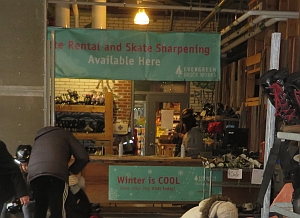 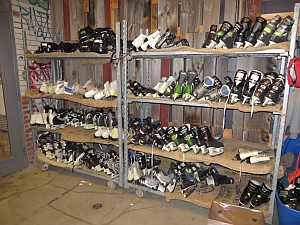 lots of gaps, lots of skaters came to rent 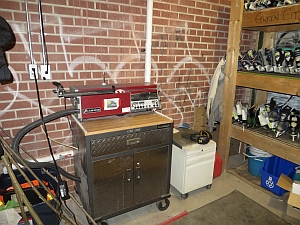 From the Brickworks skating rink web page it seems like this rink may have opened today, at last. Now they just have to update their voice mail -- it says "closed for the season."

"When we are back in action next week, we will be night flooding at least once per day  but no later than 10pm unless absolutely necessary  as we dont have any staff on site after 10pm."

"One of the reasons that the rink was closed this week was because our Zamboni was malfunctioning  it has been fixed today."

The rink phone message says it's "closed for the season" and the website says skating is cancelled. But people who know about how this rink was built say their ice-making plant shouldn't be particularly weak, and should be able to manage in even warm December weather. Maybe something went wrong?

The rink staff say that they have to wait until it gets colder before they can make ice. They say that's because they use a different kind of cooling system called eco-chill, which is not as strong as the more usual compressor-cooled systems. But the system retains the heat that comes from cooling the pad, and uses it elsewhere in the Brickworks building. 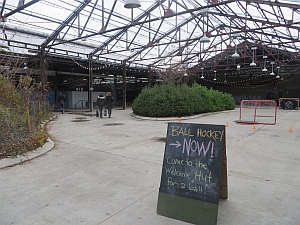 no ice yet -- maybe next week 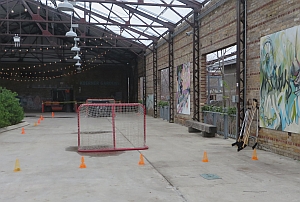 ball hockey instead of ice hockey 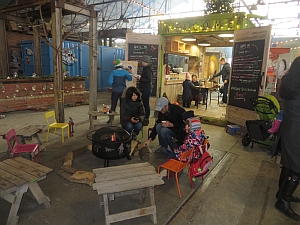 Christmas Fair instead, with campfires 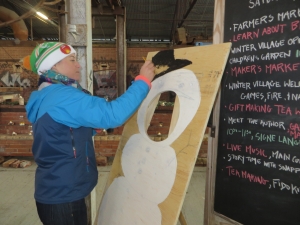 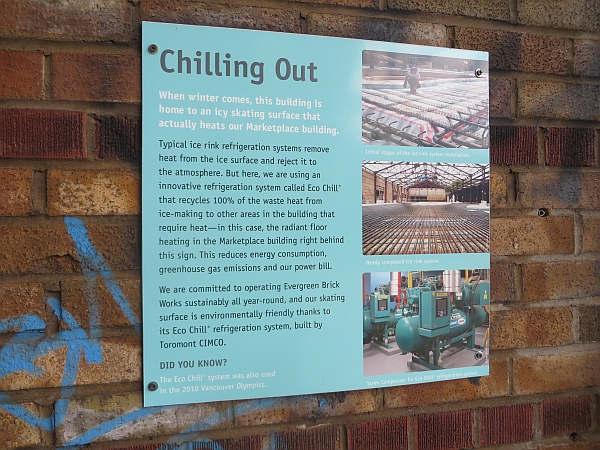 how this kind of rink works

After a week of practising, with the help of ice maintenance staff from Harbourfront's Natrel Rink, the ice-resurfacing driver cleaned the ice to prepare for opening day. 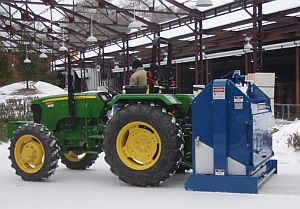 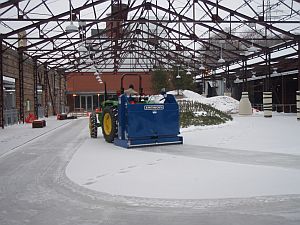 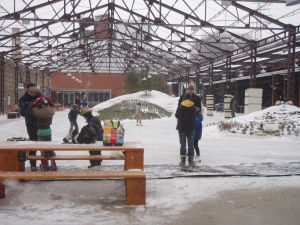 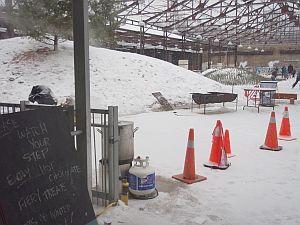 cauldron with hot chocolate and a fire to toast marshmallows

The brickworks is such a nice place to take little kids skating. They have lots of those orange skate-aids, and two very pleasant rink guards who help the kids. There's hot chocolate and marshmallows and a market inside the building right next to the rink, where you can get the best coffee, and food to take home.