You are on the [FollowUpMeetingReportApril2016] page of folder [Blogs]

Follow-up CDRC meeting report to people who wrote in

The good news is that the councillors were courteous, made eye-contact, did not catch up on their texts or chat among themselves while I was deputing, and they asked some questions and made some comments. This amount of attention was likely influenced by the many e-mails that were sent in by people on the rink lists. Thank you  it was nice to be treated well, after 5 hours of waiting (our item was put on last).

The bad news wont be a big surprise  the CELOS rink report suggested specific actions but the councillors chose to talk in a general way about animators and facilitative roles and leveraging to provide better customer service. They didnt want to inquire into the rigidities and wastefulness of the current way rinks are run. The rink reports practical suggestions  i.e. that with well-chosen, existing staff, there could be more skate loan locations, snack bars, better publicity, outreach to schools/places of worship/ newcomer groups, direct phone lines at rinks  were referred to as the Dufferin Grove model. Ward 18 councillor Ana Bailao said it would cost millions of dollars to extend that model across the city, and therefore it's not possible. (Reality check: you can see here why costs ballooned when PFR management applied their centralized version of that "model" in Ward 18 parks.)

Janie Romoff, the PFR General Manager, said we can look if theres any room for additional responsibilities among the existing rink staff but she warned the more robust those facilities become, there are operating costs that go along with that. The new Director of Recreation, Howie Dayton, suggested that a user assessment might be in the works. (Many versions from other years are already collecting dust.) 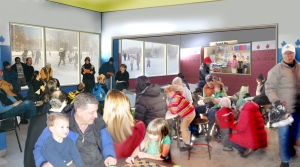 Capital Projects director Mike Schreiner, apparently referring to the slides we showed of possible inexpensive rink improvements, warned about volunteer-type construction which he said is at risk of being both unsafe and against the collective agreement. But the use of volunteer labour was not one of our suggestions.

There was no reference to skaters and on-site rink staff being encouraged or even allowed to work together to improve the rinks. And in the end the councillors decided that the 2016 Outdoor Rink Report be forwarded to the General Manager, Parks, Forestry and Recreation as input for future planning. They asked for the general manager to come back to the committee on September 20 with a report. The full text of the two motions is here.

There is some media interest in doing a story closer to the rink season, i.e. for that September meeting. I may call on you again at that time. If you want to read transcript excerpts from the April 13 meeting, they are here. And, for the record, the unedited video of the councillors rink discussion is here. It was recorded on an iPhone by Ryerson University students Helen Frank and Kelly Hoang, as part of their course work. That was very helpful, thank you to both of them.