4:35 pm: Closed though no signs or fencing to indicate, but the changeroom is locked & ice is not ready, rough/puddly & looks like concrete in patches. 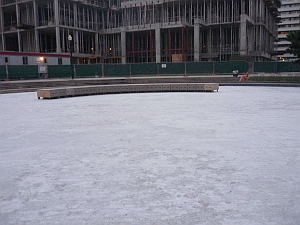 new giant condo going up behind, rink not ready 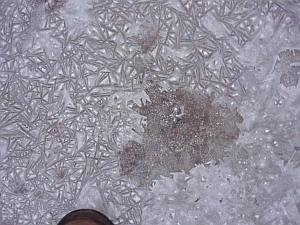 there is some ice

From last year's rink diary: There's a deep construction pit to the south of the rink. The ad billboards say it's going to be Canada's tallest condominium building, called Aura, by the Canderel Stoneridge Company. Three bedroom apartments start at $1 million, a parking spot starts at $45,000.

The website advertises the park as one of the buildings important amenities, "a three-acre oasis to call your own," and says the company will collaborate with the City of Toronto to undertake "a total rejuvenation of the park." Both the pit and the rink show up on their "live image" from their webcam.

Now the building looks to be 5-6 stories up. There's no more mention of a park renovation. The new ad says: Right next to Aura will be the park that gave College Park its name....and open green 3-acre expanse with fountain in the summer, skating rink in the winter. No other downtown condominium backs onto such a park or provides such a pleasant oasis.

311 information says that not only is the rink closed, but the schedule they have only starts from January 2. They didn't have any info on why it's not scheduled to open yet. 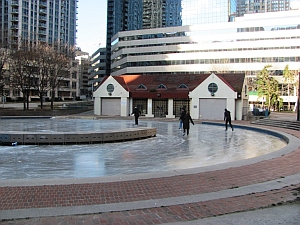 shady rink -- because of the Aura building

From rink user Rafael Lewis: The rink is open. There were a handful of skaters between 12 and 1 pm today. The ice is in good condition. 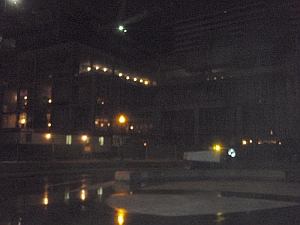 Around 7 pm there were four skaters waiting in the change room, while the zamboni cleaned the ice. Besides the two zamboni drivers, there was a rink attendant too. So the ratio of skaters to staff was near 1:1.

After the zamboni had finished resurfacing, it was driven into the garage and the two maintenance staff drove off in their truck. This is something new, storing a zamboni at College Park. Meantime the garage of the Wallace Rink zamboni is empty, because the flying squad zamboni is still in the shop. Hard to know what the system is here, exactly. 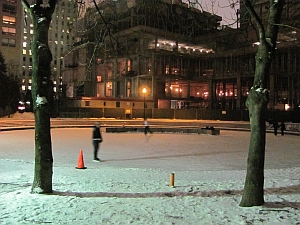 From rink user Rafael Lewis: College Park had about 6 people on the ice. I noticed a Zamboni in the garage, I didn't think the rink was big enough to have one. The rink guard seemed to be an aloof teen. He was busy reading and eating at his desk. Didn't seem to be very friendly but it didn't seem to matter to anyone.

This rink has a stylish rink house that appears not to get any routine maintenance. Every year the stucco peels back a little more. Parks management says there's a $261 million repair backlog. But a few thousand dollars to take away the slummy look of this rink house would be a good start.

There seems to be no more mention of the joint re-design project -- Aura developer and city -- that was suggested in the first condo ads. Maybe it's still on the table, though, and so nobody wants to touch the building until it's redone. That could take years. 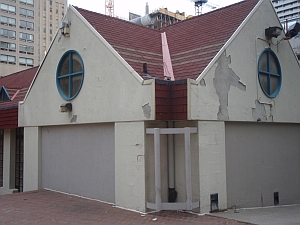 every year it's a bit worse 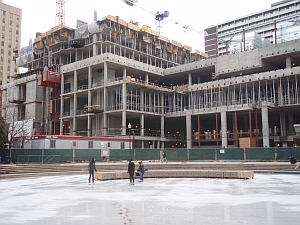 The giant condo, getting higher

One way to get some money is to permit the rink sometimes. Recently a man wanted to permit it for one hour for his wedding party, But the city said, NO -- there's policy against permitting non-hockey rinks. Yet this rink is often empty, or has only one or two skaters. One rule for all "civic" rinks takes away potential income and gains the city nothing.