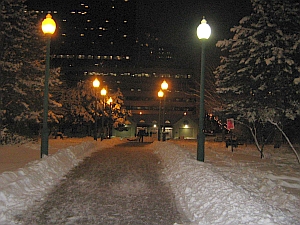 the path from the Delta Chelsea Hotel, to the south

It snowed a lot yesterday but by this evening the rink had been cleared and it looked magical. There are lots of evergreens planted around this rink, which were laden with snow, and the windows of the massed high rise buildings all around were lit up in a very cheerful way. Even so, it was a surprise to find skaters there -- the rink seems to get so few people.

A man who was there with his children said that he lives in a high-rise across the street, but will only be here a year. He was East Indian with an Irish accent. I guess many of the people who live around there are short-term, put up in a suite by their global company. That's another reason why it would be good to have the rink be a bit of a meeting-place -- so that these global nomads could plant their feet at least a little bit in an actual place, with a campfire, and rental skates, and a friendly staff person who might even introduce people to one another.

At 1.30 in the afternoon of a sunny, cold day there was one rink staff and one skater. The skater was obviously a regular, with a hockey stick -- he said his office is near there and he comes out to practice a bit of stick-handling. The building attendant said they don't get many people, and he lets skaters on with hockey sticks when the rink is empty. He doesn't make them wear helmets, either.

The rink is staffed by a young guy from 11 a.m. to 10 pm, with very few people there. The changeroom is clean, if a bit run-down -- but flooded with sunlight. there are lockers, but no food nor skates to rent. 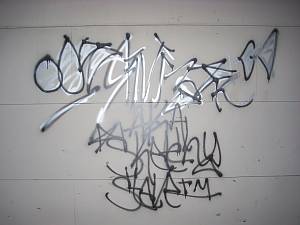 5:10pm Low 10, high 15 celsius. The area is dark and there are no skaters. There is, however, a fair amount of foot traffic as people pass through the square on their way someplace else. The rink looks like a lake. The skating surface is covered with an inch of water. However, there is solid ice underneath. You could probably skate on it if the excess water were removed. There is a lot of graffiti on the rinkhouse.