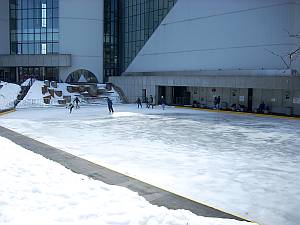 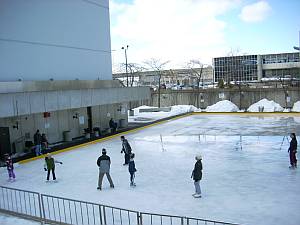 2pm Two-thirds of the rink surface is a lake unsuitable for skating. There are ten skaters on the remaining third. During CELOS' visit skaters co come and go, but many don't stay long because there isn't enough room to skate.

About 25 people skate in an orderly fashion around and around the Scarborough City Centre rink. Three staff in uniform observe the orderly skaters. The mats are not close enough to the many benches to aid skaters in accessing them except in one place. Strollers and others on wheels will find this rink hard to access. 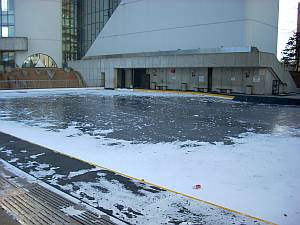 The City website says the rink will be open today, but it isn't. I get off at the Kennedy LRT stop at 11:15am. The stop is connected to the Scarborough Town Square mall, which is crowded with Christmas shoppers. (There's a big line-up to see Santa.) This is my first visit to Albert Campbell and I have a bit of trouble finding the rink. As far as I can tell, there aren't any signs showing the way. There are signs pointing to the Scarborough Civic Centre, but none to the rink itself.

When I do find the rink, it's deserted. It hasn't even been flooded. Part of the surface is shiny, but it's only a sheet of rain water that has frozen in the bitter cold. I start taking pictures. A city employee approaches and begins to make friendly conversation. He tells me the rink will probably be open on December 5. He also tells me there is a problem with the equipment because they are upgrading the air conditioning in the building next to the rink. He goes on to explain that the rink shares an evaporation condenser with the air conditioning. system. I ask him if the rink is usually busy. He says it is. I also ask if they rent out skates. He says they don't yet, but they have considered it, because it's something people ask about. It's very cold as we stand there talking. He tells me the rink is located in a bit of a wind tunnel. That is real ice, but it's only frozen rainwater. Construction cranes in the distance.